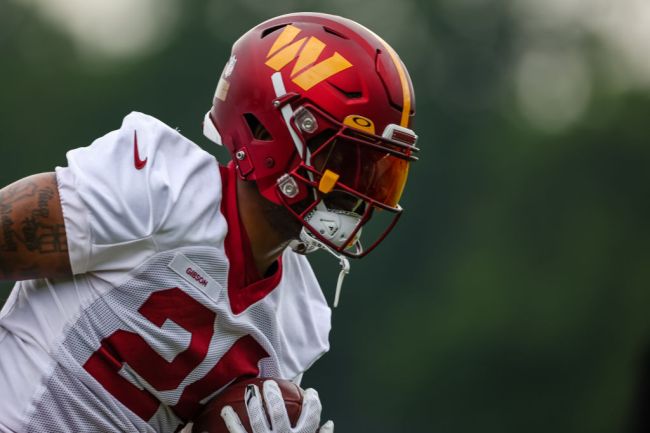 Antonio Gibson is definitely going to have a role for the Washington Commanders this season. It might not be the role anybody would have expected a few months ago, but he will certainly have a role.

Today, Commanders head coach Ron Rivera revealed the new role that Gibson will be taking on this season. According to Rivera, Gibson will be the team’s top kick returner for the 2022 season.

Ron Rivera on if RB Antonio Gibson will be the team's top kick returner this season: "You still need to see some more stuff, but you know, I think he is. I do. I think he's done a nice job.”

This, of course, doesn’t mean that he can’t also be the team’s lead running back. However, that has been seemingly less likely lately.

When the Washington Commanders spent a 3rd round pick on Brian Robinson Jr in April, it was believed that he was being brought in to serve as a backup to Gibson. Then Gibson’s fumbling issues appearing once again in a preseason opened the door for Robinson to compete for touches.

By last week, Robinson Jr was playing as the team’s starter in preseason game. This series of events has many believing that Robinson Jr could lead the backfield in touches and 1st and 2nd down and in short yardage situations. With JD McKissic locked in as the team’s receiving back, that wouldn’t leave much of a role for Gibson.

Gibson showed plenty of ability as a kick returner in college, earning the AAC Special Teams Player of the Year award in his last season in college.

While it might not be the role anybody who already drafted him in fantasy football is hoping for, Gibson will still be able to contribute to the success of the Commanders even if Robinson Jr does move ahead of him on the running back depth chart.