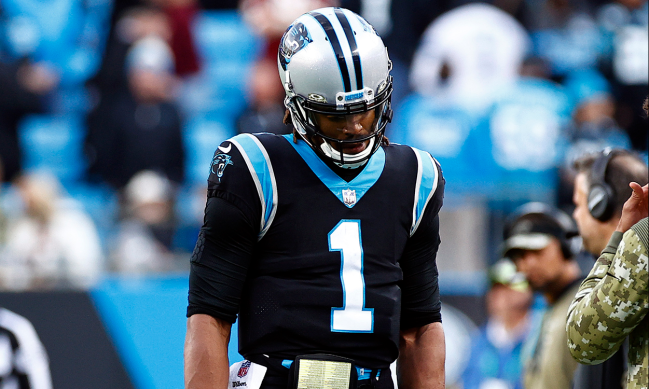 Cam Newton’s first game back as the starter for the Panthers did not go as he had hoped. After the game, his opponents got their money’s worth.

32-year-old Newton spent the first eight years of his career with Carolina before being let go in 2019. When Sam Darnold was declared out for the season with an injury, the team quickly scrambled to find his replacement.

After a few failed attempts, the Panthers, tucked tail, turned back the clock and signed Newton as a free agent. He made his debut with the team on the road last weekend in a win over Arizona but was not the starter.

Ahead of Newton was P.J. Walker. However, Newton saw limited snaps in the 24-point win and scored two touchdowns.

As a result of his performance, the former Heisman Trophy winner was named the starter for Sunday’s home game against Washington and his former head coach Ron Rivera. Upon being introduced back in front of a Panthers crowd, Newton was welcomed with a resounding ovation.

Newton was soaking it all up.

Incredible shot of @Panthers QB @CameronNewton taking the field for his return to Carolina. pic.twitter.com/29eQK510TU

And then, after scoring a touchdown, he brought back his signature Superman celebration. However, he did so in very loud fashion, running to the 50-yard-line and planting the football on the midfield logo.

Following the game, Washington players were very fired up and decided to troll Newton as they went into the locker room.

The player was referring to Newton’s first touchdown celebration of the 2021 season against Arizona. He scored, took off his helmet (he was flagged for doing so), and yelled “I’M BAAAAACK!!!!”

Now, seven days later, he is getting trolled by his opponents for claiming he was back and then losing. Tough scene for Newton and Carolina.