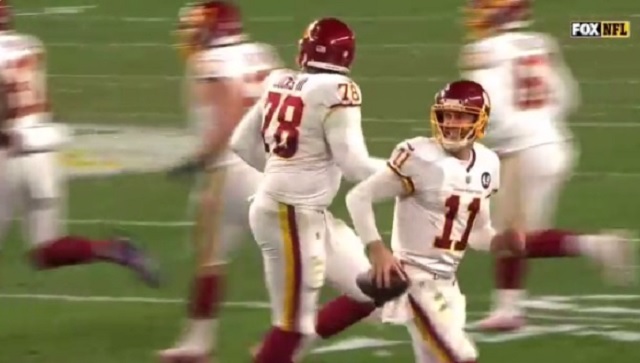 Washington QB Alex Smith is being accused of deliberately cheating to give his team more time to kick a field goal before the half.

Right before halftime of the Washington-Steelers game, refs were forced to stop the clock after Smith ran off the ball which gave Washington time to set up a field goal with no timeouts.

Alex Smith appears to jog off with the game ball, leading to an "administrative issue" that forced the refs to stop the clock and let Washington kick a field goal.

Alex Smith runs off with the ball causing an “administrative issue” and stopping the clock to give Washington (+6.5) time to kick
pic.twitter.com/bxUef3JNcv

Former NFL referee Terry McCaulay noted that refs made a mistake by stopping the clock to change balls after Smith ran off with the game ball.

The Umpire was asking for the ball at the end of the play. He then stopped the clock at :08 as he tried to get a new ball from the sideline. He should not have done that. WAS caused the delay and should not have benefited from it.

Steelers fans were angry with Smith and called him a cheater over the play.

ALEX SMITH U CHEATER TAKING THE BALL F U

@WashingtonNFL @NFL that’s called CHEATING!!! Alex Smith ran off the field with the ball, thats illegal, he clearly looked up and seen what he was doing! Those points should be removed and Alex should be removed for second half.

alex smith a cheater how you take the ball with you to the sideline???

Alex Smith with the gimpy leg is a cheat.

Yo another fine job done by @NFLOfficiating there. Seriously @nflcommish needs to address this. Smith runs off the field with the game ball and somehow the Washington team is able to stop the clock with no timeouts without penalty? Makes no damn sense #PITvsWAS #HereWeGo