Redskins Owner Dan Snyder Starts Ron Rivera’s Introductory Press Conference Off By Wishing Everyone A Happy Thanksgiving, So Things Are Off To A Roaring Start 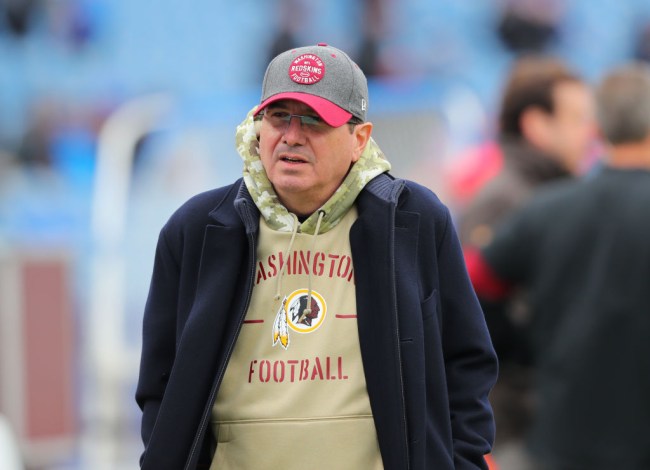 Today, on January 2nd 2020, Snyder walked up to the podium set to introduce Rivera to the organization and began by saying ‘Happy Thanksgiving.’

I’m not sure I’ve ever laughed out loud while watching any sort of press conference, but that changed today thanks to Snyder.

I mean, what in the actual hell is going on here? I think that this is a fireable offense, to be honest. I know most Redskins fans aren’t too fond of Snyder seeing as how Washington has won exactly two playoff games since he bought the team in 1999, but to open up a presser in January and saying ‘Happy Thanksgiving’ with a straight face not realizing you made a mistake is straight-up mind-blowing.

Rivera is standing to the side and immediately caught the slip-up and started laughing, but I think he’s laughing while also thinking ‘did…did my boss just say Happy Thanksgiving two days into a new year?’ Sorry, Mr. Rivera, but you aren’t in Charlotte anymore.

Anyways, Happy Thanksgiving to you too, Mr. Snyder, I hope you and the family had a wonderful day a month and a half ago.

The most infuriating thing about this entire situation? Snyder is worth $2.6 billion and just stood in front of the media and said ‘Happy Thanksgiving’ on January 2nd while I know what date it is and just stressed out about ordering a slice of pepperoni pizza that cost 75 cents more than a regular cheese slice.