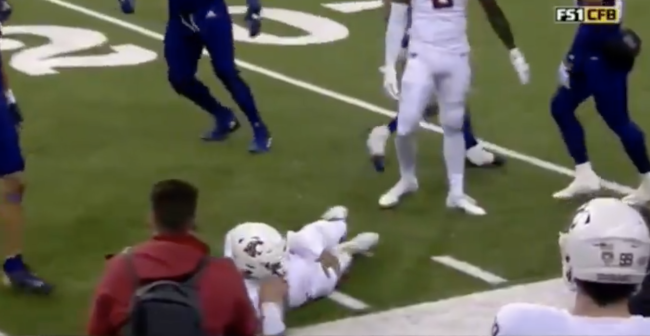 Washington State football owns the state of Washington for, at least, the next 365 days. In this year’s Apple Cup, the Cougars put a 41-10 beatdown on the UW Huskies in a rivalry game coached by two interim head coaches.

The MVP of the win was running back Max Borghi, but quarterback Jayden de Laura was the star. The sophomore from Hawaii played at Saint Louis School in Honolulu, which has produced quarterbacks such as Timmy Chang, Marcus Mariota, Tua Tagovailoa, and Chevan Cordeiro.

At the tail end of one of his three rushing attempts, de Laura was flagged for a truly hilarious unsportsmanlike penalty. Late in the game, the 5-foot-11, 195-pounder took off to the sideline on a read option.

As he slid to the turf, de Laura posed as if to say “paint me like one of your french girls.” And then the official, who is super lame for doing so, threw a flag.

Washington State went on to dominate their in-state rivals and de Laura was a big part of the in-game and postgame festivities. After beating the Huskies on the road, the Cougar faithful who made the trip decided to storm the field on the road.

Not only was it an unprecedented move, but it came after beating a 4-8 team as a 7-5 team. Savage.

In the middle of the people of Pullman was de Laura.

He immediately ran to his sideline after the clock hit zero and grabbed the Ol’ Crimson, Wazzu’s flag. After getting his hands on the flag, he planted it on the 50-yard-line and the crowd went nuts.

Washington State has bragging rights for the next 12 months and it doesn’t seem like de Laura is going to be quiet about the win. Coug Up!