JJ Watt Laughs At His Brother Tying NFL Sack Record On One Play, Getting Hit In Groin On Next Play 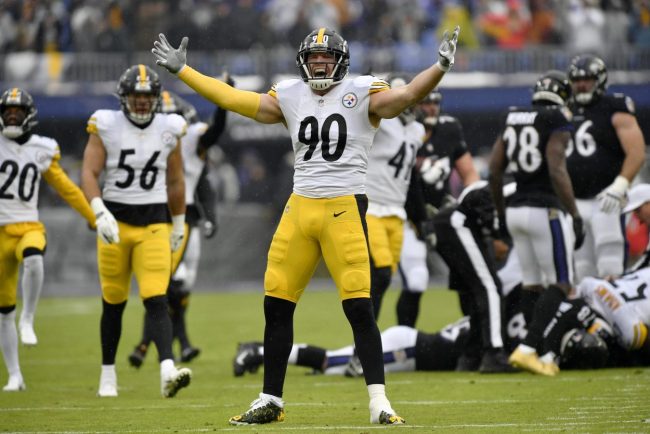 Pittsburgh Steelers defensive end T.J. Watt experienced the highest of highs on one play and then an extreme low on the very next. His brother, J.J., thought it was hilarious.

During Sunday’s game against the Ravens, T.J. Watt tied Michael Strahan’s single-season sack record by taking down Tyler Huntley near the goal line. Watt recorded 22.5 sacks in 15 games, which was one game less than the former Giants defensive end.

As one might expect, he celebrated accordingly on the field.

Here is another look at his history-making sack:

After his brother tied the record and cemented his name in NFL history, J.J. was proud.

While the excitement and glory was immense, it didn’t last long.

On the very next play, Watt almost got to Huntley again. However, the second time, Huntley got the ball of at the last second.

Simultaneously, he threw his right knee up into the air and accidentally kneed Watt right where the sun doesn’t shine. After taking a knee to the groin, Watt waddled off of the field in clear discomfort.

It was quite the hilarious fall from grace on back-to-back plays.

TJ Watt knocked this ball down then had his own balls knocked up pic.twitter.com/DIgh2K2jtg

Got the All-Time NFL Sack Record on one play, got kneed in the nuts on the next play.

Life comes at ya fast @_TJWatt

The sequence of plays was rather unfortunate for T.J., but it is a series of plays that he will never forget. Fortunately, he was able to get back in the game after some time to breathe through the groin shot at halftime and the Steelers went on to win the game in overtime.