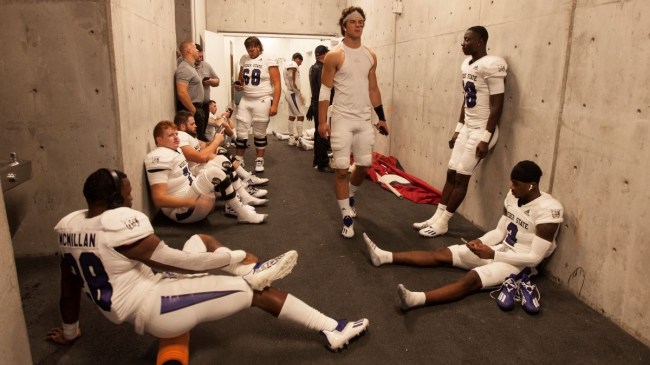 The Weber State football program, which I’ve recently learned is the Wildcats, not the Fightin’ Dame Lillards, is one of the best in the nation in FCS football.

The ‘Cats are 6-0 this year and are currently ranked fifth in the nation in the FCS Coaches Poll. So you’d have to believe that they’re a pretty fundamentally sound football team, correct?

That idea was put to the test Saturday as Weber State went on the road to take on No. 2 Montana State. Things started strongly for the Wildcats as they took a 3-0 lead. But then things got off track a bit.

A botched snap on a punt led to a safety that cut the lead to 3-2.

No matter. Weber State responded well and had a somewhat commanding 24-9 lead late in the second quarter. Then disaster struck again.

This safety lit a spark under the Bobcats who forced a stop and scored a touchdown to cut the lead to 24-18. They then stopped the Wildcats again on the ensuing and wouldn’t you believe it…

Montana State turned the game all the way around and led 27-24 early in the third quarter. That’s when the Wildcats made a little bit of history, and not the good kind. Long snapper Grant Sanders, for the fourth time in the game, sent a ball sailing over his punter’s head. The punter then kicked the ball out of the back of the end zone for an FCS record fourth safety.

Sanders was pulled from the game after the fourth bad snap and tight end Logan Snyder came in to replace him. Lo and behold, Snyder was able to get a snap into his punter’s hands.

Logan Snyder into the game at long snapper and that is a successfully executed punt for Weber State. Let's go crazy! pic.twitter.com/dnrVaKywgK

Fans couldn’t believe what they were seeing.

You have got to be kidding me https://t.co/lnVmSQmMX1

I’m not much of one for religion. But if somebody wants to buy that poor long snapper a beer tonight just send us your Venmo information.