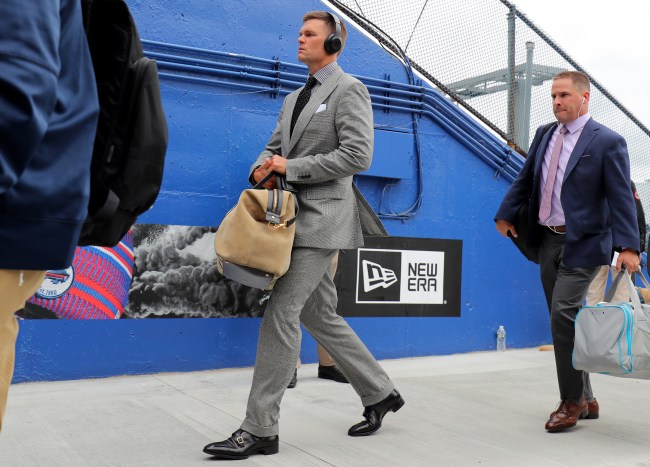 Week 4 of the NFL season gifted us with the first of many BYE weeks and holy hell one of those of teams happened to be to the New York Jets. What a gift. If the Jets had every Sunday off until the end of time, it still wouldn’t be enough. The Niners were off too, but that was hardly as painful. Especially since Jimmy GQ’s mere existence warrants top-shelf news.

But of that, let’s get to the point of why we’re here. So in my weekly tribute to enthusiastic CNN anchor Chris Cuomo, who simply refuses to stop saying this and neither will I — whaddya say, let’s get after it!

The fact that Tom Brady, the apparent GOAT, has chosen a tissue — yes, a tissue — as his pocket square is an embarrassment for the ages.

I dare you to click this video. Aaron Rodgers looks like he’s been on a bender for six years and has a secret rival with Dexter Morgan. I honestly respect it.

The Broncos pathetically lost to the Jaguars but at least there’s this? Yeah, there’s this. Cool romper, bro.

This is an absolute disaster but it’s hard not to love the happiness.

🎥 @KirkCousins8 addresses the media after today’s game against the Bears. https://t.co/NM2VPZxLfX

If your name is “Kirk” you’ve already lost. By a lot.

Much love to the Jordans, less love to everything else.

Cameron Wake walks the truth and I’m not about to talk shit.

"I love the effort of our guys. I thought they battled for four quarters."

491 yards of total offense, but the #Packers come up a play short on Thursday night.

Yeah, uh, maybe switch to… something. Ya’ look great, Matty!

Well, there’s a new hero in town and his name is Jacob Martin. Who the hell is Jacob Martin? Ya’ got me. But he just busted up this game and here’s to stay.

Sure, the Texans laughably lost to — checks notes — the Cam-less Carolina Panthers but this photo actually happened.

Bill Belichick 9/29: 'It was a tough football game'

For someone who’s seen obscene success, it’s insane how miserable The Bill looks. Great suit, though.