WFT’s Chase Young Refuses To Get On Cart, Attempts To Walk To Locker Room After Suffering Serious-Looking Knee Injury 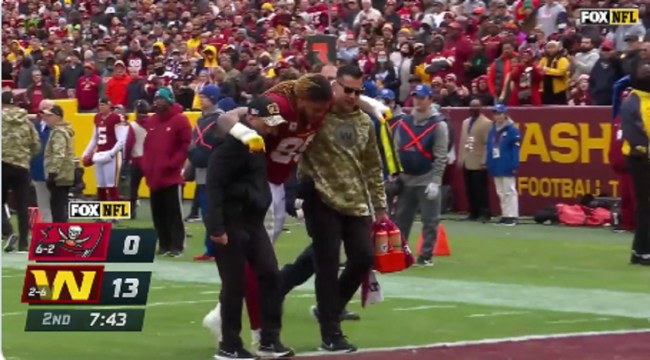 The Washington Football Team suffered a terrible blow to their team of Sunday.

During WFT’s game against the Bucs, young defensive star Chase Young appeared to go down with a serious-looking knee injury.

Despite being unable to walk on his own, Young waved off the cart and was helped into the locker room.

Chase Young was helped off of the field and is headed to the locker room after injuring his right leg. pic.twitter.com/heo05Y8mlh

Young was later ruled out for the rest of the game as he gets evaluated.

Washington DE Chase Young was quickly ruled out for rest of the game with a knee injury.

The initial fear for Washington DE Chase Young is a torn ACL, source said. The team is awaiting a full battery of tests, but if the diagnosis is confirmed, that would, of course, knock him out for the season.