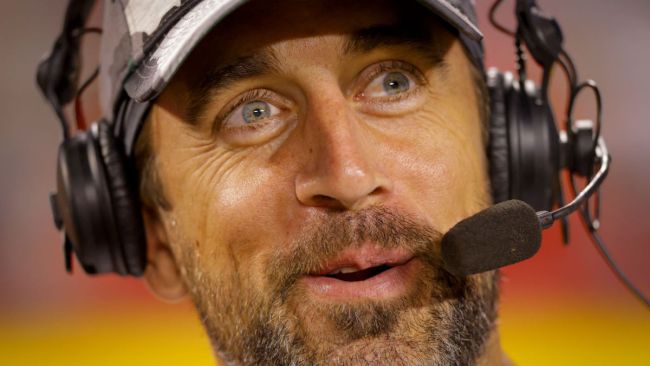 During a recent appearance on Joe Rogan’s wildly popular podcast The Joe Rogan Experience, Green Bay Packers quarterback and two-time defending NFL MVP Aaron Rodgers revealed that he has played in an NFL game on Percocet while dealing with nagging injuries.

This admission from Rodgers is just the latest drug-related reveal from the 38-year-old four-time MVP and one-time Super Bowl champion, as he confirmed earlier this summer that he has previously experimented with the highly-psychedelic drug ayahuasca.

With Rodgers now confirming that he’s played a game “under the influence” of Percocet, NFL fans and internet detectives obviously tried to figure out which game that was, and, truth be told, it wasn’t all that difficult of an investigation.

Among other things, Aaron Rodgers said that he’s played games on Percocet before, which he later admitted was a bad idea.pic.twitter.com/qRXPUqpGok

The conclusion? The opening game of the 2018-19 season, which saw Rodgers injure his knee against the Chicago Bears. While Rodgers missed the rest of the first half following the injury, he returned following halftime and unsurprisingly lead the Packers to a 24-23 victory over their fierce division rivals.

The “investigation” into Rodgers now-infamous Perc Game was so simple because Rodgers famously gave a glaze-eyed, high-pitched, grin-filled interview following the game.

Look at what a halftime perc did for this man I’m sick https://t.co/dbXE7J65lc pic.twitter.com/SjUpupiaFo

As things currently stand, the Green Bay Packers — due to their combination of Rodgers and an elite defense — are currently tied with the Kansas City Chiefs with the third-best odds to win Super Bowl 57 at +1000, trailing only the Buffalo Bills (+550) and the Tampa Bay Bucs (+700).

Rodgers and the Green Bay Packers will kick off their 2022 season — without the services of elite wide receiver Davante Adams — against the Minnesota Vikings on Sunday, September 11 at 4:25 p.m. EST.