Will Cain, Brian Cashman, And Aaron Boone Rappel Down 22-Story Building In Stamford 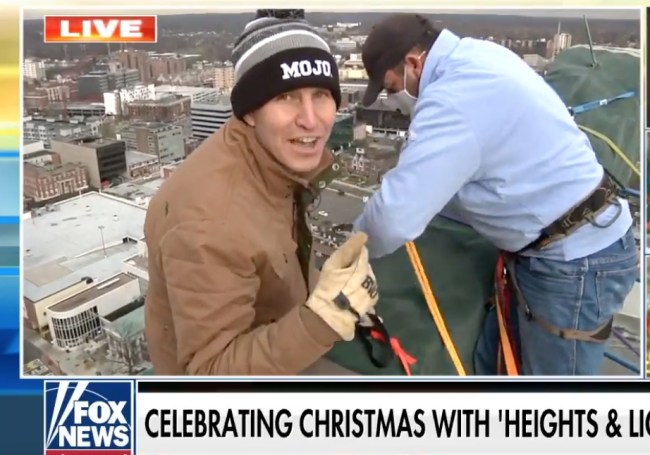 Will Cain, a weekend co-host on ‘Fox & Friends,’ Yankees GM Brian Cashman, and Yankees manager Aaron Boone decided to have a bit of adrenaline-pumping fun on Friday morning by rappelling down a 22-story building in Stamford, Conn.

While it didn’t necessarily start out as a race, Cain pulled ahead of the two Yankees as they made their way down the building. Plus, out of nowhere, The Grinch showed up and flew down the side of the building like it was nothing. He also tied a knot in the other guys’ ropes in Grinch fashion.

The rappelling down the wall was a part of ‘Heights & Lights’ in Stamford.

As for how Cashman got Boone in on the action, he simply said Boone “likes doing things that have never been done before.” People have been rappelling down buildings for a while there Mr. Cashman, but we get what you’re saying, he just wanted to get the blood pumping a little bit and there’s no better way of doing that than swinging outside a 22-story building.

Cain recently returned to the political world in mid-August after spending almost two years hosting ‘The Will Cain Show’ on ESPN Radio and making appearances on other shows on the network. Cain spent time being a fill-in host at CNN beginning in 2011 before making the jump into the sports world and now back in the political side of media.