Will Ferrell Thinks LeBron James Should Run For President 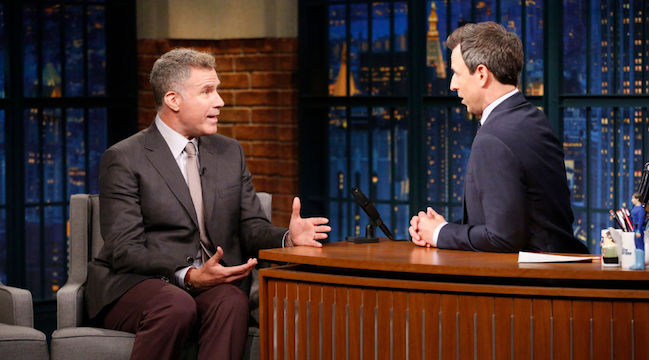 A person with no political experience whatsoever recently stumbled his way into becoming the President of the United States, so it’s only natural that other people with no qualifications are looking into running. Dwayne Johnson has flirted with the idea on multiple occasions, but he’s far from the only high-profile celebrity who’s discussed throwing their hat into the ring.

Will Ferrell appeared on Late Night with Seth Meyers on Sunday night, and the discussion eventually turned political when Ferrell discussed a run-in he had with LeBron James at an Equinox in Boston:

“The teams would stay at this hotel because they also had, it was connected to an Equinox gym… the teams would stay at the hotel so they could do their pregame workout. And the Cavaliers were there. And I’m, you know, lifting weights, using the Universal weight system. Love to get some Universal weights. And I see LeBron James. So, I don’t usually bother people. I kind of know Kevin Love a little bit. UCLA. I said hi to him. Then I went over to LeBron. I was like, ‘I just have to say hello. How are you?’ And I said, ‘I was just telling my wife the other night that you need to run for president. You’re from the Midwest. You’re very famous, you’re very popular, you’re very articulate. Please run for office.”

LeBron might have never held public office, but he’s no stranger to politics. He’s called out Donald Trump on a couple of occasions since the election, and it’s very doubtful he would make a trip to the White House if the Cavaliers manage to recover from their slow start to the season.

LeBron for MVP (Most Valuble President).