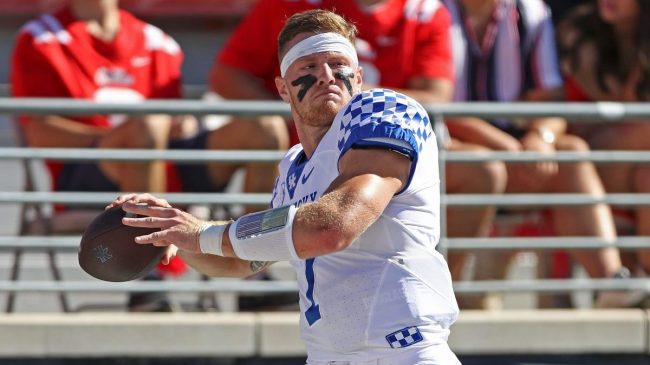 Things are going poorly for the seventh-ranked Kentucky Wildcats and star quarterback Will Levis on Saturday. Mid-way through the second quarter the ‘Cats trail No. 14 Ole Miss 19-6 and Levis is just 3-of-6 for 44 yards.

But that’s not the worse problem facing Kentucky, Levis and head coach Mark Stoops. In fact, it’s not even close.

Levis was called for intentional grounding in the end zone early in the second quarter. The play resulted in a safety and, in much worse news, a dislocated finger for the potential No. 1 pick in the 2023 NFL Draft.

The Rebels are in control against the No. 7 team in the country.pic.twitter.com/BoyabqgboB

Fingers are not supposed to bend that way and that’s just about the only way you can get away with giving a referee the middle fingers.

College football fans were horrified by the injury.

Others made some jokes at Miami Dolphins’ coach Mike McDaniel’s expense.

It's a back injury.

Others thought he should just rub some dirt in it.

Eh popped er back in https://t.co/x4ZvbCjy5D

At least Levis already has his Edward Scissorhands Halloween costume sorted for the end of the month.