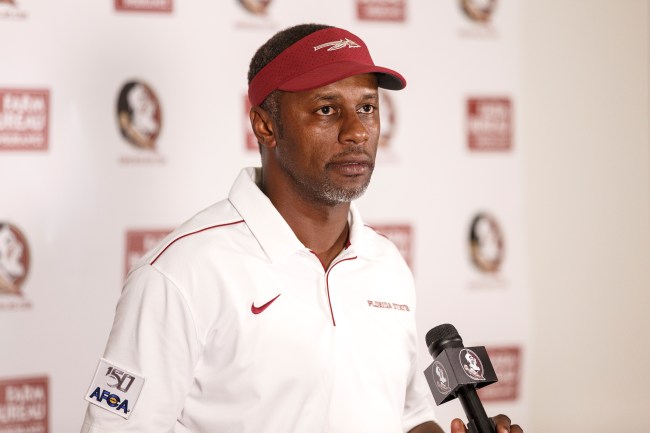 Willie Taggart seems like he’s a little bit over his head running the Florida State football program, doesn’t he? The second-year Seminoles head coach — who showed up in Tallahassee with a bunch of top recruits and loads of talent from the Jimbo Fisher era — just can’t seem to, you know, actually coach these group of kids. Taggart failed mightily last season when the Noles went a paltry 5-7, and, in the first game of this new season, blew an 18-point lead at home against Boise State to lose in pretty disgusting fashion.

FUCK Willie Taggart and FSU. Can you believe they paid 5 mil a year for that 🐍? https://t.co/dsUDdFckei

Like last year, the Boise State loss showed a common theme that the Seminoles have yet to conquer under Willie Taggart; closing a game out. And, while there can be tons of reasons for why the team continues to falter late in games, an excuse that the head coach himself gave is literally insane.

That’s because, while speaking with reporters, Taggart claimed that dehydration may have attributed to the loss against Boise State as anything else, going on to say that he needs his coaches and training staff to really stay on players about drinking water. No, seriously, a man who gets paid millions of dollars said — and, presumably, believes — this to be true.

According to the Tallahassee Democrat, Taggart indicated that his medical staff had to “force” players to better “hydrate and take care of themselves” moving forward and that he was unsure “if we did a good job of that last weekend.”

“I think after going through last weekend and seeing our guys going down and cramping, one thing we talked about with our medical staff is our guys got to hydrate.

“I don’t know if we did a good job of that last weekend. One of those situations where you live and learn, and we’ll make sure that we help our guys when it comes to that.”

Considering the majority of Florida State players tend to hail from the hot and humid state — and, well, Willie Taggart seems insane to use dehydration as a possible excuse for blowing an 18-point lead in their home stadium — people on Twitter really ripped the head coach after hearing his BS theory. Take a look at what people were saying below.

So Florida State has five years left on their deal with Willie Taggart AND they have to pay Oregon for his buy-out. pic.twitter.com/QdaHzWOhAK

Next week it will be the band’s fault ……

@paul_lander Florida State coach Willie Taggart says he thinks his team might have lost in part to Boise State because they weren't properly hydrated.
If only the game was in a state where they invented Gatorade?

When you live in Florida and “forget” to hydrate… good one

Willie taggart is stupid if he thinks dehydration was the problem. All those kids are from Florida and use to the heat. Willie needs to be fired. #noles #FSU

Never seen a coach get away with saying stupid shit like this, other coaches would be murdered for even trying use excuses yet here we are being forced to question if dehydration was actually a factor! He took an L end of.

Excuses, excuses … nope … the reason for the loss is Willie Taggart, plain and simple

So Willie Taggart is using dehydration as an excuse for Saturday's collapse? At home? Against a team traveling over 2000 miles not accustomed to those playing conditions? @dannykanell That is pathetic.

Another Willie Taggart excuse. Time to face the truth!! Look in the mirror!!

First game of the season and the team wasn’t prepared by the coaches. They wilted in the humidity to a team that plays in Ida freaking Ho

With an overall head coaching record of just 52-58 — which includes just one season of double-digit wins at stops like South Florida, Oregon and Florida State — Willie Taggart doesn’t seem to have the pedigree to run a high-profile program like Florida State. Sure, it’s only year two under him, but seeing Oregon turnaround the season after he left sure hurt his reputation, as does the way things have gone for him since taking over the Seminoles.

If there’s any silver lining to all this, it’s the fact that, just maybe, Willie Taggart could be out of excuses like this real soon — because FSU will undoubtedly can him if he doesn’t start winning soon. While that would require the school to eat an absurd $17 million should that happen this year, according to HERO Sports, it might be worth it after seeing how embarrassing the Noles’ football team has become since he took over.