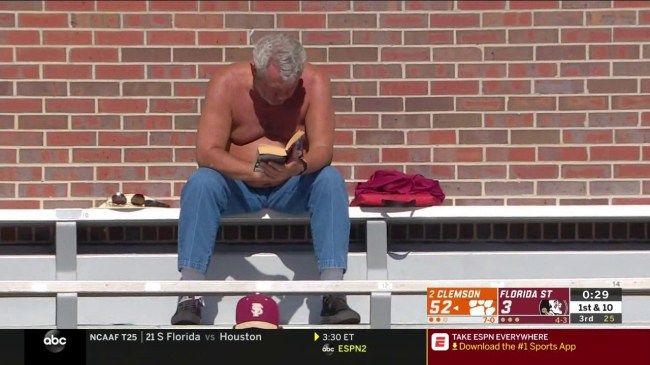 As a kid of the ’90s, anytime I think of the Florida State Seminoles football team, I envision guys like Charlie Ward at quarterback, Patrick Boulware at linebacker, Peter Warrick at receiver and a slew of other All-Americans who were taking the Noles to big-time bowl games and national championships. But, sh*t, those days clearly are long gone — and the Clemson Tigers made sure to show the entire nation today.

The No. 2 Tigers came in and walloped Florida State in Tallahassee, winning by a score of 59-10, which matches the biggest defeat in school history for the Seminoles. From start to finish, Clemson had its foot around the neck of the Noles and, well, they just kept stepping down, ultimately embarrassing them in grand fashion.

As the humiliation was going down, social media made sure they noticed what was happening with Florida State, and, as we all know, the Internet usually always wins, so people went in HARD to make fun of the Seminoles’ situation. Look at some of the fire that Twitter users had to say.

How bad are things at Florida State? Well… pic.twitter.com/hm4LIVe7SQ

"Siri, show me Florida State football in a gif" pic.twitter.com/BoL58MD0vH

Is Florida State going to a bowl game this season? pic.twitter.com/BdjffcQcYM

How Florida State’s season has gone so far. pic.twitter.com/Tw0PT7KPjP

Sure, it’s common coach speak to say something like, “well, it’s just one loss,” but F*CK THAT, ’cause this is a program killer. It’s one that makes top recruits who are still enamored by the FSU logo think twice about the direction of the team, and proves that the Noles are way behind college football’s elite programs like Clemson.

Not only did the performance on the field blow horse D, but the Seminoles’ fans ae already turning against them, as many of them were seen leaving Doak Walker Stadium midway through the third quarter!

Florida State fans leaving #FSUvsClemson. They yelled some things about their team that cannot be repeated. pic.twitter.com/uaFD1vONBs

While the loss drops the Seminoles to a paltry 4-4 on the season and in danger of missing a bowl game, the bigger question has to be the future of head coach Willie Taggart, who wasn’t a popular hire to begin with to replace Jimbo Fisher this past offseason. Taggart now has a career record of 51-54 as a head coach, so, yeah, something tells me between his mediocrity and this blowout loss, Florida State might be looking to bring in someone who doesn’t get used as toilet paper by one of its biggest conference rivals.

Being a Florida State football fan right now sucks, but, hey, at least there’s ESPN Classic to remind you of the good ol’ days, right?