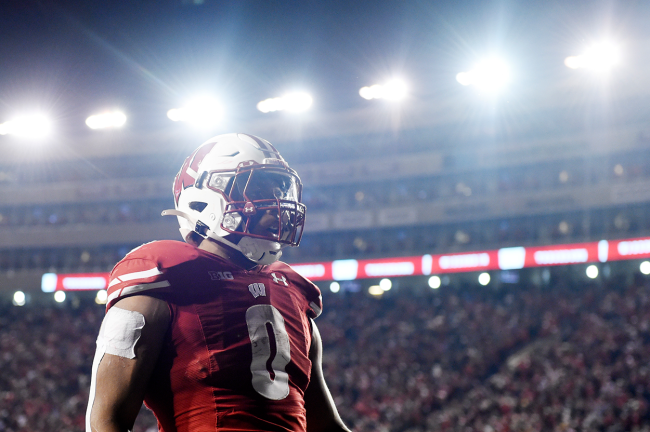 After taking over for Jonathan Taylor at Wisconsin in 2021, Braelon Allen had some big shoes to fill. He did not skip a beat and now he has the Big Ten on notice.

Even though Allen only turned 18 in January, he stands 6-foot-2, 238 pounds of pure muscle. You would never know how old he really is, especially after he sent out something of a warning shot to his opponents on Friday.

He posted four selfies with no context and, in all four, he is either putting in work in the weight room or looks absolutely jacked. Or both.

Allen’s workout gallery should have Big Ten defenses shaking in their boots. Especially after such an impressive season as a true, underaged freshman last year.

As can be seen in his weight room photoshoot, Allen is not just dominating opponents on the field. He is going big and getting big in the weight room as well.

In turn, the Wisconsin-native is talking big talk about his strength. Earlier this offseason, Allen completely belittled Saquon Barkley over his rather large clean as a freshman.

And the Badgers back backed up his talk with a massive PR of his own. Allen is huge and the fact that he is only an 18-year-old sophomore is scary. Don’t sleep on Wisconsin.