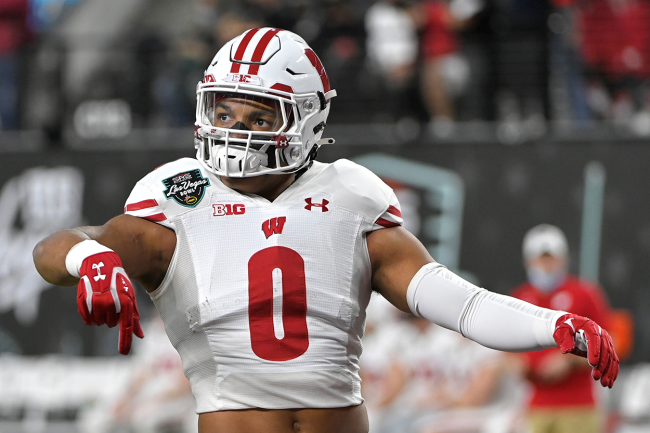 Wisconsin running back Braelon Allen had some big shoes to fill when he took over the primary ball-carrier role for the Badgers from Jonathan Taylor last season. He did not skip a beat.

Allen went for 1,268 yards on 186 carries as a freshman with 12 touchdowns. And he was not even supposed to be a freshman.

After committing to Wisconsin as part of the Class of 2022, the Wisconsin-native reclassified and joined the team in 2021. So, technically, he should have been a senior in high school last season.

But you would never know. Even though he just turned 18 in January, Allen stands 6-foot-2, 238 pounds and is as explosive of a runner as they come.

Not only is he dominating his opponents on the field, but he is absolutely crushing it in the weight room.

Wisconsin running back Braelon Allen is all muscle.

A video recently surfaced of Saquon Barkley hang-cleaning 390 pounds as a freshman at Penn State. That is a massive number for most players on a college football roster, let alone a running back.

Saquon Barkley cleaning 390 as a freshman at Penn State 😧
pic.twitter.com/0zbH4ydDJ0

Allen was not impressed. He completely belittled Barkley’s impressive clean by calling it “cute.”

While it might seem as though Allen is talking smack without merit, he most certainly has the tape to back it up. Earlier this year, as someone who could just as easily be finishing up his senior year of high school rather than entering his sophomore year of college, Allen put up 406 pounds on his PR clean.

Wisconsin got themselves another one. Allen is a beast and made Barkley’s impressive clean look insignificant.