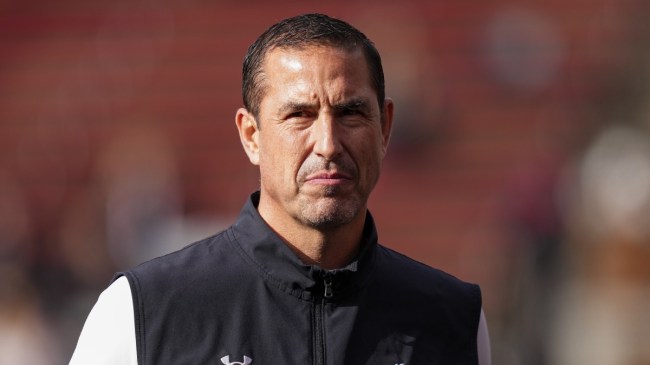 When the Wisconsin Badgers fired Paul Chryst early in the season, many panned the move. After all, Chryst had won big in Madison. He finished his stint at his alma mater with a 67-26 record, was two-time conference coach of the year and won his division three times. Many asked if Wisconsin could find someone better than Chryst, given his success at the school.

And, when they named longtime NFL safety turned Wisconsin defensive coordinator Jim Leonhard interim coach after Chryst was fired five games into the season, many thought Leonhard would get the permanent job. But, after a loss to Minnesota for Paul Bunyan’s Axe on Saturday, they decided to make a big splash.

In an absolutely shocking hire, Cincinnati’s Luke Fickell will be the next head coach at Wisconsin.

Pete Thamel had it first.

Sources: Wisconsin has targeted Cincinnati’s Luke Fickell to be the school’s next head coach. https://t.co/FNAKRcu5Vb

And, it appears as if Fickell has already informed the Bearcats.

Luke Fickell will be the next head football coach at Wisconsin, sources confirm to @TheAthletic. Fickell informed University of Cincinnati he is leaving to take the new job.

This process has been reported by multiple outlets today. @PeteThamel was first to break news of pursuit.

I said shocking, and it is. But, it’s shocking for all the right reasons for Badgers fans. Fickell has experience in the Big Ten. He starred as a four-year starter for Ohio State and coached there as well, serving as the interim head coach in the 2011 season following the tattoogate scandal. Urban Meyer kept him on as defensive coordinator in Columbus, and he left for Cincinnati following the 2016 season. He won big there, and went 57-18 in six seasons. The Bearcats went undefeated in 2021 and became the first G5 team to crash the playoff, where they lost respectably to Alabama.

He’s shown his recruiting prowess as well. He’s routinely recruited better than many P5 schools and had a top-30 class lined up at Cincinnati in the class of 2023. Seems like an outstanding hire for the Badgers, who have one more year left in the putrid Big Ten West before the conference scraps divisions.