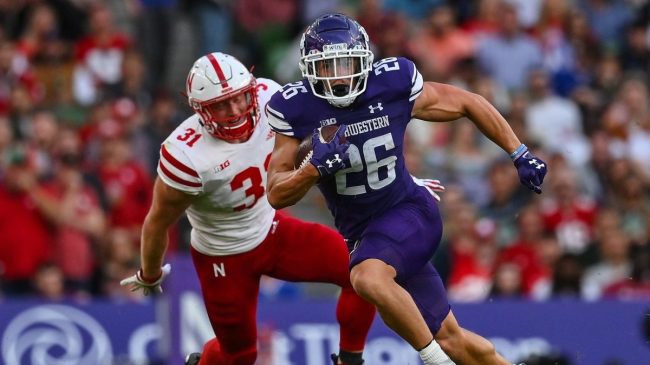 Score one for college football fans who are in favor of abolishing divisions. Since splitting into East and West, the Big Ten has traditionally been dominated by teams from the East.

The Wisconsin Badgers have represented the West in the conference title game four out of eight times, while both Northwestern and Iowa have made a pair of appearances.

Somehow, though, this year’s version of the Big Ten West is even worse than usual.

The Badgers suffered an embarrassing week two loss to Washington State. The Hawkeyes have the worst offense in Division I FBS football, and suffered a 31-23 loss to the lowly Duke Blue Devils their last time out.

And that’s not even the worst of it.

Big Ten West’s No Good, Very Bad Day Has Fans Calling For It To Be Abolished

The Wildcats began the season with a 31-28 comeback victory over the oft-embattled Nebraska Cornhuskers. Any good feelings brought on from the win quickly went away when the Huskers lost to Georgia State in week two. Northwestern also did its part with the aforementioned loss to Duke.

Things got worse for both on Saturday as Nebraska got drubbed by Oklahoma. The Sooners lead that game 49-7 mid-way through the fourth quarter.

Not to be outdone, the Wildcats are currently five minutes away from losing to 0-2 FCS foe Southern Illinois. The Salukis started the year with a 64-29 loss to Incarnate World before falling 34-31 to Southeast Missouri State in week two.

Purdue served as the division’s final hope. But sixth-year quarterback Aidan O’Connell threw a pick-six with under seven minutes remaining to put the Orange ahead 25-15.

All college football fans could do is laugh.

A team solely comprised of Michigan walk-ons would finish in the top half of the Big Ten West and I'm only ~75% kidding.

One even turned to President Joe Biden for help.

What are you gonna do about the big ten west @JoeBiden

But others just realize it’s a lost cause.

Another banner day for the Big Ten West so far.