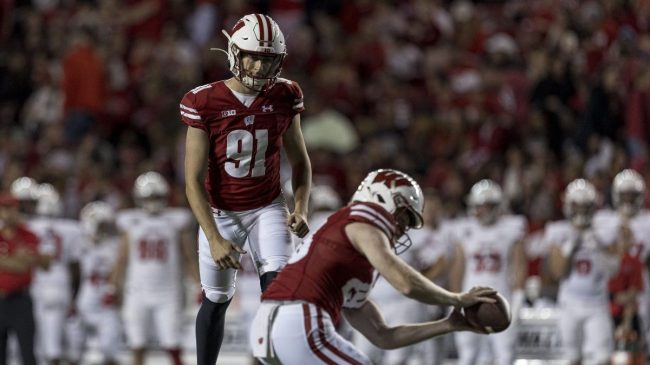 The Wisconsin Badgers entered Saturday’s game against visiting Washington State as significant favorites. After a 38-0 shutout over Illinois State in week one, the Badgers were 17.5 favorites over the Cougars.

But early indications show the Badger might just be in for a dog fight.

The Cougs needed a narrow escape in week one to beat Idaho 24-17. But looked much more early on against Wisconsin in Camp Randall.

The Badgers’ first drive of the game went just 12 yards on six plays before a punt following the opening kickoff. Wazzu quarterback Cameron Ward led the Cougs deep into Wisconsin territory on the following drive. But the charge ended when Ward was intercepted by at the Badgers’ 17-yard line.

From there, it looked like Wisconsin had hit its stride. The Badgers methodically worked the ball into Washington State territory. But that’s where the drive stalled.

Wisconsin head coach Paul Chryst then called on kicker Vito Calvaruso to attempt a 51-yard field goal. He may not be rethinking that idea.

Calvaruso transferred to Wisconsin after playing a pair of seasons for the Arkansas Razorbacks. The Missouri native had no field goal or extra point attempts with the Hogs, though he did notch two tackles.

He received his first chance at field goal kicking in week one against Redbirds and went 1-for-1 from 28 yards. Calvaruso also made all five extra point attempts.

So you can understand Chryst’s belief in his kick. Though we learned Saturday that 51 yards might be just a bit farther than he’s comfortable with.

Calvaruso sent his 51-yard attempt wide right. And when we say wide right we mean wiiiiide right. The kick just narrowly caught the protective netting behind the uprights.

This is a D1 kicker. This is not a movie where they pulled a fan out of the stands to pretend to be a kicker. This guy gets free room and board and an education to do . . . That. https://t.co/VTWV8McaEz

One fan even wondered if it was on purpose.

And of course the Major League references weren’t far behind.

Gotta have a short memory, kid. You’ll get the next one.