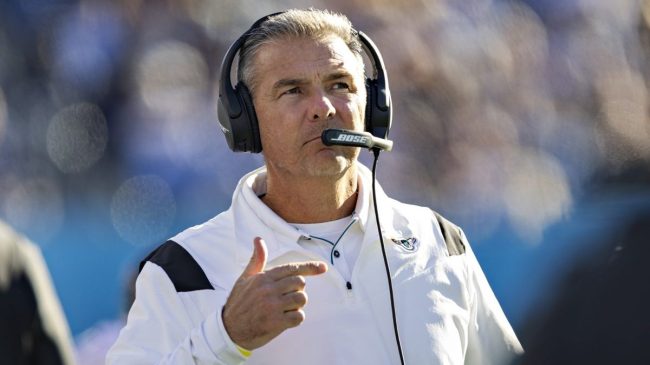 Frost went just 16-31 in his four-plus seasons at the helm at Nebraska. The Huskers have just one winning season since firing Bo Pelini in 2014 and they followed that up with a 4-8 season that led to the firing of Mike Riley.

But Nebraska fans haven’t given up hope. The Huskers fan base is one of the most loyal in the country and they showed by turning up in droves for FOX’s Big Noon Kickoff show ahead of their game against the Oklahoma Sooners.

Nebraska fans also made sure to make their voices heard when it came to choosing their next head football coach.

Iowa State head coach Matt Campbell is currently the betting favorite to coach the Huskers in 2023. He’s joined by Mark Stoops of Kentucky, Lance Leipold of Kansas and Chris Klieman of Kansas State as prospective names.

Disgraced former Jacksonville Jaguars coach Urban Meyer joined the show, and the Nebraska fans were sure to show him the love.

Chants of “we want Urban” rang out through the crowd as a smile came across the face of Meyer and his co-hosts. Meyer last coached in college in 2018 when he went 10-1 and led Ohio State to a Rose Bowl victory.

Since then, his career has taken some interesting turns. But that clearly doesn’t matter to Nebraska fans who just want to bring some juice back to a once-proud program.

Be careful what you wish for.