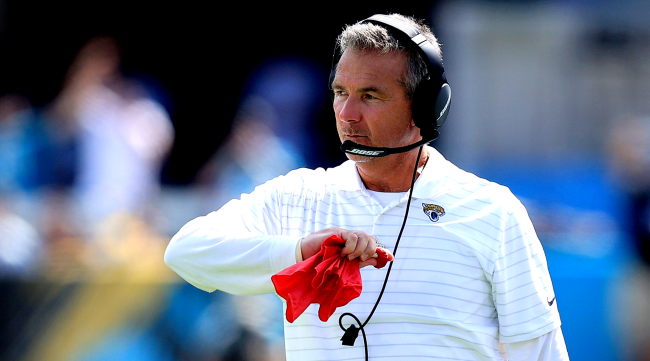 After going 2-11 and causing numerous controversies, Jacksonville Jaguars fans will not be looking back on the Urban Meyer era fondly.

Nor will, apparently, several members of his football operations staff.

One staff member recently told The Athletic that the environment with the Jaguars during Urban Meyer’s tenure was “the most toxic environment I’ve ever been a part of. By far. Not even close.”

One incident that exemplifies that environment reportedly took place during Urban Meyer’s very first staff meeting with the Jaguars.

According to multiple sources that were in the meeting, Urban Meyer announced, “I hate scouts. Scouts are lazy.” The team’s scouts were present in the room.

And yet, Meyer reportedly wasn’t familiar with some of the best players in the NFL, asking one staff member, “Who’s this 99 guy on the Rams? I’m hearing he might be a problem for us.”

Some of the quotes from the Urban Meyer athletic article sound like they come from Its Always Sunny pic.twitter.com/exh9iI3dN1

“He feels like threats are what motivates,” said Chark. “I know he would come up to us and tell us if the receivers weren’t doing good, he wasn’t going to fire us, he was going to fire our coach. He would usually say that when the coach was around.”

Related: Fans React To Urban Meyer Explaining The Differences Between College Football And The NFL

Other Jaguars players were understandably not impressed with Urban Meyer when he told them, “Do you know what would happen if I cut you guys? You couldn’t get a job paying more than $15 an hour.” The insinuation being that their only skill in life is playing football.

“The way he was running the ship, it was impossible to succeed,” said Chark, adding, “You’ve got players in fear that they’re going to lose their jobs. You’ve got coaches who he belittled in front of us, and I can only imagine what he was doing behind closed doors. I’m surprised he lasted that long, to be honest with you.”