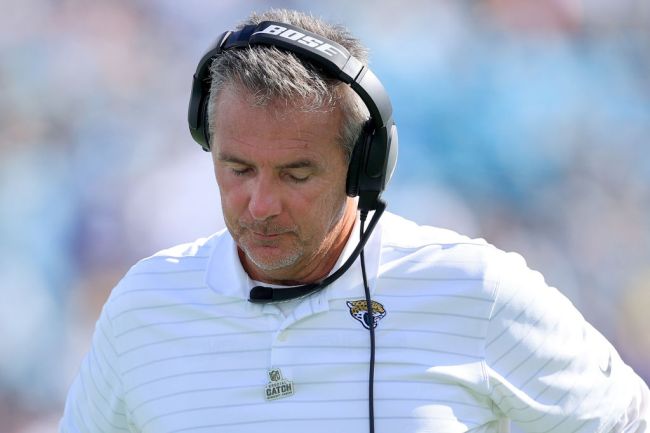 The Jaguars snapped the second-longest losing streak in NFL history on Sunday morning but it was not the biggest news out of Jacksonville. Per No Laying Up’s Todd Schuster, the Urban Meyer bar saga has reached new heights.

Schuster, better known as Tron Carter, is one of the four co-founders of the golf-focused brand and media company No Laying Up. He is well-connected in the golf space and has nearly 70,000 followers on Twitter.

NoLayingUp.com, which began amongst four friends at Miami (Ohio) University, is revolutionary in the way that it covers the sport of golf. You can read more about the company, which consists of a blog, YouTube channel and podcast in this profile from The Athletic.

Schuster, who borrowed his nickname from a Dave Chapelle skit, is from Ohio. Prior to the Jaguars’ game against the Dolphins, dropped a BOMB on Twitter.

Schuster’s tweet alleges that in addition to the first two videos from Meyer’s night out in Columbus, there is a third video that is worse. He also claims that “plenty of lurid texts” were exchanged between the two parties.

Additionally, Schuster says that “a certain coach’s wife” has been calling the woman’s family with threats. He cites “multiple sources in Columbus.”

Jags in London vs Stinky Tua.

Meanwhile, multiple sources in Cbus telling me about existence of a third video worse than the first two and plenty of lurid texts between both parties. And a certain coach’s wife threatening the woman’s family, calling her mother and grandfather.

In a follow-up tweet, Schuster says that “she is keen to ensure this video doesn’t leak to the press,” referring to the coach’s wife.

Schuster’s claims come 15 days after the first video of Meyer at the bar was leaked by an electrician in Columbus on Twitter. Since then, a second video shows Meyer getting handsy with the woman he was with at the bar.

The mother of the woman in the video spoke about the situation and said that she is concerned for her daughter’s job and emotional status. Jaguars owner Shad Khan said that Meyer must regain trust and respect.

There have been a lot of developments and reports surrounding Meyer’s evening out and you can find them all here. However, if Schuster’s most recent allegations are true, things are about to get a lot more interesting.