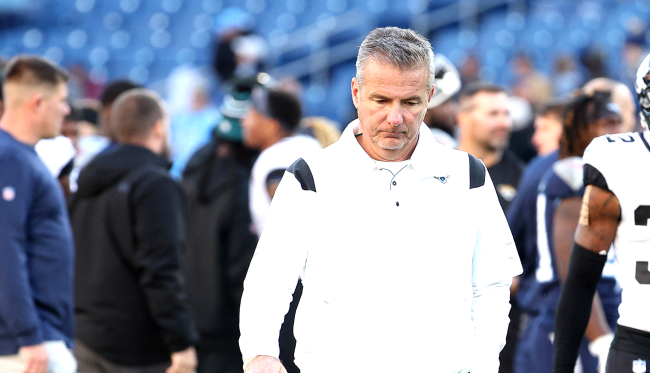 In case you were not aware, there are a few differences between college football and the NFL.

Urban Meyer, who went 199-35 as a college football head coach, then was fired before even finishing his first season as an NFL head coach after a 2-11 start, is here to explain.

During an interview this week with Dan Dakich, Meyer spoke about his short-lived NFL coaching career.

What other differences are there between college football and the NFL?

“You know, the amount of reps you get before you go play a game, to me, was shockingly low. For example, we would practice, you maybe get one or two reps at something, next thing you know you’re calling it in the game. In college, you never do that. In college, you’re gonna get at least a dozen opportunities to practice that before you ask a player to go do it in the game. So there are a lot of differences.”

A lot of differences, people.

“In professional football, there’s no recruiting,” Meyer revealed. “So it’s all scheme and it’s all roster management. You’re getting guys rolling in on your organization on a Tuesday and they’re gonna play for you on a Sunday. So there is some obvious differences to the two games.”

These revelations led to more than a few reactions by football fans on social media.

Not enough reps? How much time do college players get to practice if they have to actually attend class?

"I can get away with kicking a college kid"

"You have to pay for lap dances in the pros."

“Well ya see everyone has basically the same budget to recruit and retain players. That was very bad for me.”

*I* apparently know more about the difference between college and NFL football than Urban Meyer did before taking the Jaguars job https://t.co/jhHT8rsley

Meyer also expressed how bad he felt while coach the Jaguars

“It was the worst experience I’ve had in my professional lifetime,” Meyer admitted. “What really got me, I almost don’t want to say people accept it, I mean, you lose a game, and you just keep… and I would seriously have self-talk. I went through that whole depression thing too where I’d stare at the ceilings and like, ‘Are we doing everything possible?’ because I really believed we had a roster that was good enough to win games. I just don’t think we did a great job.

“It just eats away at your soul. I tried to train myself to say ‘Okay, it happens in the NFL.’ At one point, the Jaguars lost 20 in a row. Think about that. 20 games where you’re leaving the field where you lost. And we lost five in a row at one point and I remember I just really couldn’t function. I was trying to rally myself up, I was in charge of the team, obviously, and then we won two out of three, and I really felt like we flipped that thing.”

Related: Urban Meyer Finally Addresses Accusations Of Him Kicking A Jaguars Player, Admits To ‘Tapping’ Him

As for whether we will ever see him on a football sideline coaching again, the 57-year-old Meyer told Dakich, “At this point, no.”