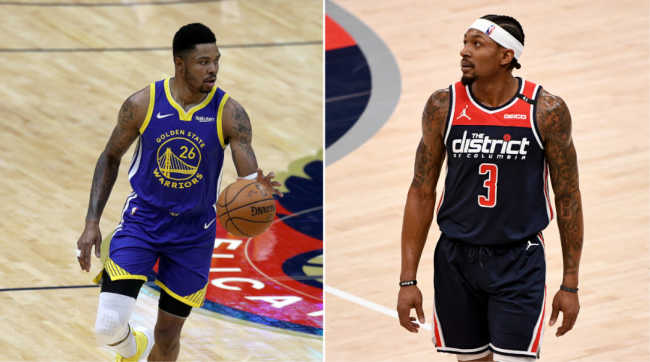 We got a good old-fashioned NBA beef brewing between Kent Bazemore and Bradley Beal after Bazemore took a shot at Beal after the Wizards star got injured while scoring 50 points.

For those who don’t know, Beal is currently averaging 31.4 points per game and is chasing Warriors Steph Curry, who leads the league, averaging 31.9. The scoring race heated up on Saturday when Beal scored 50 points and Curry responded a few hours later by casually dropping 49 points. Unfortunately for Beal he hurt his hamstring during his 50 point outing and is now forced to sit out for the next two games.

After the Warriors win on Saturday Bazemore took a not-so-subtle shot at Beal. “Forty-nine points in 29 minutes, that’s unreal,” “We got guys hurting hamstrings to keep up.”

“49 points in 29 minutes… That’s unreal. We got guys hurting hamstrings to keep up.”

Beal caught wind of Bazemore’s comments and absolutely blasted him for it.

@24Bazemore you don’t know me or shit about me bruh!!! You don’t know why I go out there and play and it damn sure ain’t for another man’s approval!!! You a straight LAME!!! But it don’t surprise me coming from you, thats what’s yo type do!!

I stay in my lane!! Focus on BRAD. Idc what another man doing in this league. I’m concerned about me and MY GUYS over here!! Keep that goofy shit over there @24Bazemore !!

@24Bazemore it’s funny you say that because ya mans admittedly checked my numbers before the game, but IM CHASING!!! Shut yo ass up!

Beal’s wife also chimed in and took shots at Bazemore.

I wouldn’t hold my breath for a response. But hey, maybe after a long night of 8 points, 1 assist, 1 rebound, 6 turnovers and 6 fouls he will have some time.

I’ll just leave this right here…
Sometimes, your best bet,
is to just shut up. 🌽 https://t.co/ST00ga8rUV

I’m mad we even giving relevancy to someone most people didn’t even know was still in the league.

"I guess you can't joke anymore."