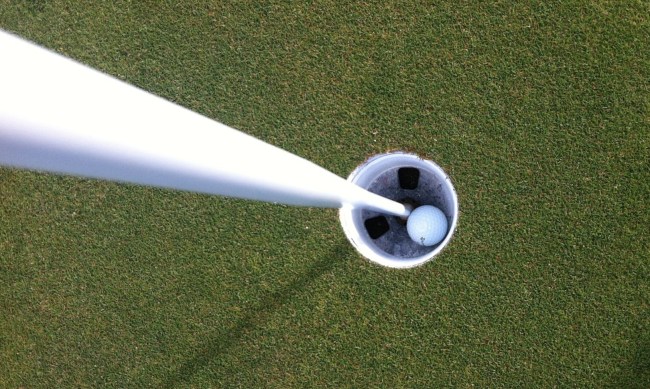 While many golf courses around the United States are closed at the moment due to The Big Cancel, those that have been able to remain open have come up with clever ways to help stop the spread of germs.

Two things golfers touch throughout a round – obviously – are the flagstick and the actual cup when grabbing their ball out of the hole so courses have come up with different ways to keep that from happening. Leaving the flagstick in at all times is an obvious rule right now, but either raising the cup itself, having the cup above ground completely or putting a device like the end of a pool noodle in the hole is pretty common practice these days.

With these changes to the holes, there’s been plenty of debating going on about what shots to count when it hits a hole above the ground and whatnot, especially when it comes to hole-in-ones.

It’s pretty clear that El Santiago Executive Golf Course, a Par 3 course in The Villages, FL, has made up their mind about what counts and what doesn’t count and it’s a damn travesty.

They elected to put some sort of device in the actual hole that won’t let the ball drop into the cup at all, but that didn’t keep one lady from claiming to have made not one, but two holes-in-one back-to-back.

This does not count as a hole-in-one. I’m sorry, mam, but your ball never fell into the hole, you essentially hit the flagstick and that’s literally it. Hats off to hitting two great shots in a row, but how dare you?

I’m all for anybody getting out and playing golf and certainly all-in on courses taking things seriously by making the game as safe as can be right now, but the audacity of claiming even one of these as holes-in-one is disrespectful to the game.

Now, did I get robbed of a hole-in-one two weeks ago after the ball 100% bounced in the cup, off the end of the pool noodle and nestled two inches from the hole? Yep, sure did. Did I then bitch about it on Twitter eluding that I would have counted it if it went in? Maybe I did, who knows?

A noodle in the hole may have just cost me a hole in one.