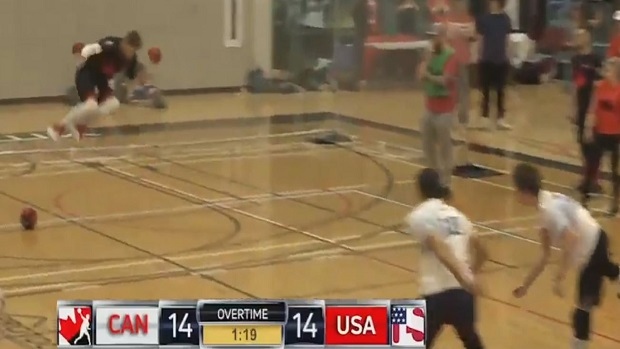 The United States actually has a national dodgeball team, how do I tryout for the team? Team USA was playing in the World Cup of Dodgeball against Canada and it was of course aired on ESPN 8 — The Ocho. Even in dodgeball, the U.S. showed they are superior to Canada.

On Wednesday, the U.S. toyed with Canada at first and allowed Canada to grab a 12-2 lead, which was very generous of us.

Then Team USA pulled up their big boy pants and stormed all the way back from the seemingly insurmountable deficit. Team USA, who is definitely not made up of average Joes, was able to tie up the game to force overtime and then claimed an incredible comeback victory.

Canada was up 12-2 in the World Cup of Dodgeball.

Looks like Canada needs to get back to training and learn the 5 D’s of dodgeball: Dodge, duck, dip, dive and dodge.”

Don’t let this distract you from the fact that Canada blew a 12-2 lead against the United States.