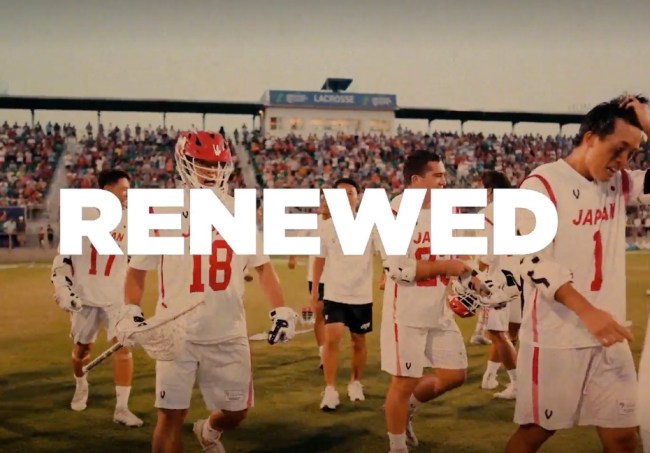 It’s been a very long time since lacrosse was an Olympic sport.

Flash forward to the present: Lacrosse continues to boom as a youth sport in the United States and around the world. Tens of thousands of fans traveled to Rentschler Field in Hartford, Connecticut for the 2022 NCAA Men’s Lacrosse Championships, where the Maryland Terrapins took home their fourth national title. Paul and Mike Rabil’s Premier Lacrosse League is continuing to make inroads in the sports landscape, now in its third season.

The game requires speed, agility, lightning reflex, and an emphasis on teamwork. It’s significantly older than the sport of basketball by centuries. It embodies the Olympic ethos through and through.

So, why is lacrosse not in the Olympics?

That’s a question that an organization called World Lacrosse is trying to answer.

The organization just rolled out of a campaign to get lacrosse considered for the 2028 Olympic Games in Los Angeles. It’s called “LAX: Indigenous Made, Globally Played”, leaning into the hashtag #LAX28.

According to World Lacrosse CEO Jim Scherr, the time is right for a bigger stage: “The last several decades, our sport has seen tremendous growth, including participation and fandom in new regions, investment from leading figures in adjacent sports, and the development of different styles of play. This campaign emphasizes lacrosse’s origins, its evolution and the next generation of competition, which hopefully includes an opportunity to showcase the game in the Olympic arena.”

Other sports being considered for the 2028 games include baseball/softball, breaking, cricket, flag football, karate, kickboxing, motorsport, and squash.

World Lacrosse President Sue Redfern adds in a statement: “This campaign is the perfect way to celebrate both our history and our future, recognizing and acknowledging our origins, while sharing the progress that puts us in a position to contend for a place in the Olympic Games. Our members, athletes, and the wider global lacrosse community are overwhelmingly united in their support for our efforts to bring the game back to the world’s greatest stage.”

The initiative launched on the International Day for the World’s Indigenous Peoples, with the goal of further celebrating the game’s unique Native American roots and the participation of the Haudenosaunee Confederacy in World Lacrosse events.

Goes without saying, lacrosse being back in the Olympics would be a huge opportunity to further #GrowTheGame. The sport is constantly hyped by its most vested stakeholders as being the next biggest thing, for decades now. Generational growth moves slowly and patiently.

Given the passion of the lacrosse community as a whole and the evangelism of the sport within that community, it shouldn’t be that tough to convince the International Olympic Committee. But there’s tons of work carved out to get the game to that stage.

It’s a noble cause that anyone who’s ever dabbled in the sport can get behind, from current youth league players to former D3 club players who hung the turf dogs up to cherish their glory days.