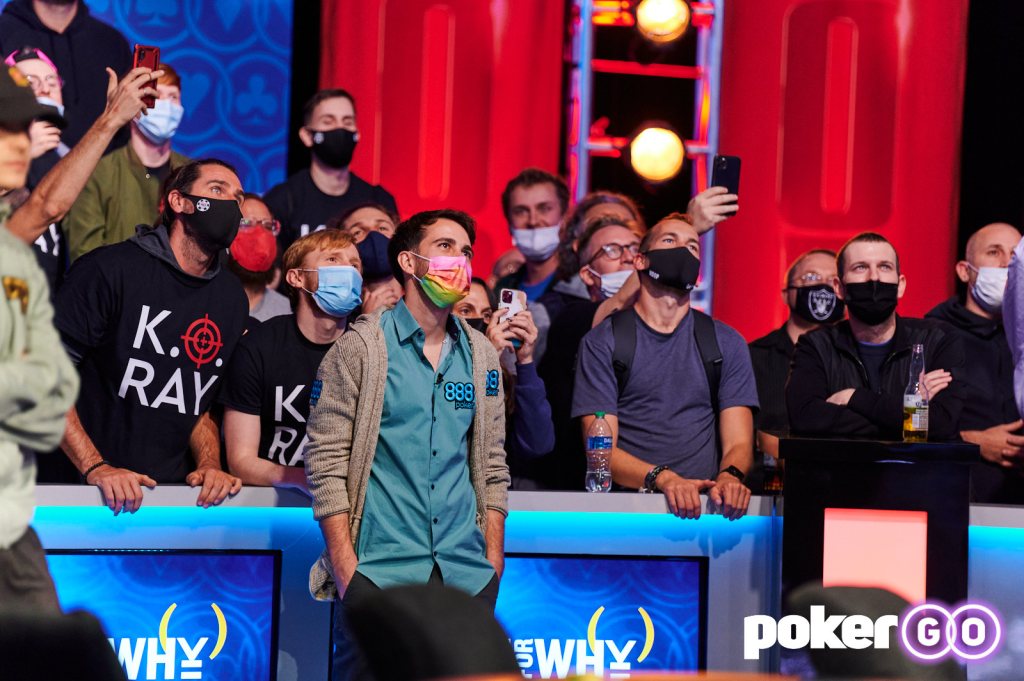 The final three players at the 2021 World Series of Poker Main Event will enter Day 9 with hundreds of millions of chips in play. Koray Aldemir is the chip leader with 264,600,000.

This intimidatingly massive chip stack held by Koray Aldemir was juiced by this wild hand below. Koray was already the chip leader before this hand but he picked up 69.5 million chips in this 138,000,000 chip hand that sent rapper Alejandro ‘Papo MC’ Lococo home in 7th place with a payout of $1,225,000.

Every final table is different but Alejandro ‘Papo MC’ Lococo was 2nd place in chips before this hand and it’s not often that you see the player with the second-most chips going at the chip leader like this. Usually the fattest chip stacks bully around the smaller stacks who are under more pressure with every hand. And that’s part of what makes this such a special hand of poker:Here’s the footage via PokerGo:

After Lococo was eliminated in 7th place for $1.225 million, the final table play continued until there were just three players left in the Main Event, and here they are:

Day 9 of the Main Event starts Wednesday at 2:00pm.

The recap of an eventful Main Event final table coming soon at https://t.co/cZfe0GrBNK

Whoever finishes in 1st place will win the coveted World Series of Poker Main Event bracelet, a place in the poker record books, and a cool $8 million. Second place will earn $4.3 million this year and the third place finisher will take home $3 million.

Day 9 of the WSOP Main Event will resume at 2pm PST with these three players left at the final table. Meanwhile, the World Series of Poker made a huge announcement this afternoon.

Beginning next year the World Series of Poker is leaving The Rio and partnering with Caesars Entertainment. The 2022 WSOP will run from May 31 – July 19 and events will be played at Bally’s and Paris Las Vegas Hotel & Casino. Also, Vince Vaughn will be next year’s WSOP Maser of Ceremonies.

The 53rd Annual World Series of Poker will be held at @BallysVegas & @ParisVegas, May 31-July 19, 2022 w/ actor, comedian & card player Vince Vaughn as the event’s official Master of Ceremonieshttps://t.co/16a0gXpgQK pic.twitter.com/u7gHrrpIzA

And while the Main Event concludes there are still plenty of other tourneys taking place. Phil Hellmuth, who we ran an incredible interview with here last week, is currently 2nd place in chips in the Razz Championship.