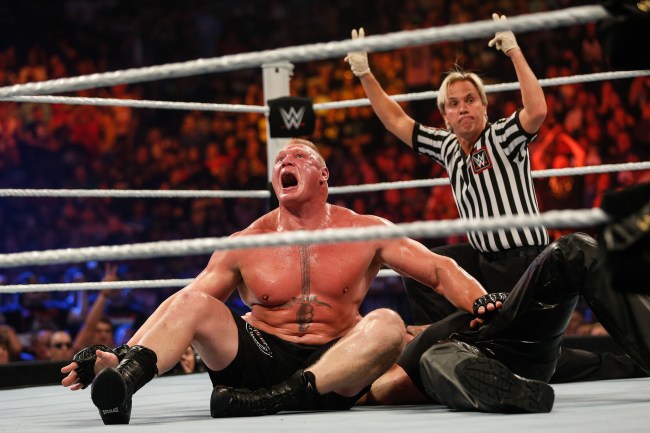 NEW YORK, NY - AUGUST 23: Brock Lesnar in action during his fight against The Undertaker at the WWE SummerSlam 2015 at Barclays Center of Brooklyn on August 23, 2015 in New York City. (Photo by JP Yim/Getty Images)

The WWE released a statement along with their Q4 ’17 and FY17 earnings report announcing that CFO George Barrios and CMO Michelle Wilson were being promoted to Co-Presidents, a reward for “their contributions to four years of record revenues and the successful transformation to a multiplatform business model.” In part 1 of a wide-ranging 2-part interview, JohnWallStreet asked Mr. Barrios about the WWE’s evolution as a business, its position as a pioneer in the OTT space and what drives the company’s popularity across so many international markets.

JWS: The WWE business model has changed several times under Vince McMahon’s ownership. For readers that aren’t familiar with the company’s history, can you provide some background on how the business has evolved to where it is today?

George: The company has reimagined itself multiple times over the last 30-40 years. It went from selling tickets in the northeast, to taking advantage of that great technological innovation that was fiber (or cable) to the home and creating media, to then allowing the media to create a product business so that you could engage with the product on a video game or with apparel or an action figure, to playing those technologies to go global and then the latest re-imagination is this social, digital and direct to consumer transformation.

JWS: You’ve been credited with leading the company’s latest transition to a multi-platform model. Can you discuss your initial vision and how you’ve seen it come to fruition?

George: In 2008-2009 we laid out where we wanted to go, where we thought the world was going and went about it step by step. It was about getting deeper locally, creating new content and data technology. The big “leave-behind” was our PPV business. We said we’re going to take our most premium content and go direct to consumer. It was a lot of thinking about where the world was going, not just where it was; and then just committing to it in a big way. It wasn’t that long ago, maybe 2-3 years ago that people criticized us, made fun of us or ignored us; today we’re at a place where people are saying, “how did you do it, we’d love to do it too.”

JWS: The WWE has a global following (India, Pakistan, Mexico, U.K. China etc.). What is it about the company that enables it to resonate with audiences across the world?

George: There are two things that come together that are both universal and timeless. The first part is the story telling. If you look across cultures and across time, the stories remain the same. Whether it’s Katniss Everdeen in Hunger Games or Luke Skywalker in Star Wars, it’s the hero’s journey. John Cena is going through the hero’s journey, Roman Reigns will go through the hero’s journey. The second thing that is universal is the ring. Whether it is the ancient Greeks or a village in India, everyone in the world, since the beginning of time, knows what happens in the ring. They may not know every nuance, but they get 80-90% of it. I love the NFL, but it’s a complex game that most people don’t understand.

Howie Long-Short: WWE reported record revenue ($801 million, +10% YOY) for full-year 2017, with adjusted OIBDA (operating income before depreciation and amortization) also setting a company record ($101.9 million, +40%). For Q4 ’17, the company increased revenue 9% YOY to $211.6 million; while increasing paid subscribers to the WWE Network from 1.41 million to 1.48 million. Shares are up 67% since October 25th, 2017 (and 17.75% in 2018). The primary catalyst is the optimism surrounding the company’s next series of television contracts. The current deal with NBCUniversal (for RAW/SmackDown) pays the company $200 million/year. It’s expected the next deal will double in value. Broadcast deals in India and the U.K. will also be expiring at the end of Q4 ’19.

Fan Marino: WrestleMania 34, entitled “Showcase of the Immortals” is Sunday Night in New Orleans. Brock Lesnar and Roman Reigns will headline the event, competing for the Universal Championship. Brock won’t be the only former (his return may be pending) UFC star on the card though, as Ronda Rousey makes her biggest WWE appearance to date in a mixed tag-team match with Kurt Angle, Triple H and Stephanie McMahon. WrestleMania 34 will stream live around the world on WWE Network this Sunday, April 8 at 7pm ET.

Editor Note: In Part 2 of the interview (to be released on Friday) we ask George why the WWE is more attractive than ever from a marketing standpoint (corporate sponsorships +29% YoY in ’17), about the financial impact WrestleMania has on the host city and to explain the mathematics behind the company’s subscription business model.

The Toronto Star and CBC are reporting that Major League Baseball teams restricting fans to exclusive secondary ticketing marketplaces (see: Stubhub, TicketsNow etc.) are both profiting from the resale of those seats and using the secondary market as an alternative means of  ticket distribution. StubHub (EBAY) head of global communications Glenn Lehrman acknowledged that teams “do very well (financially)” from tickets sold on the online resale site, a fact previously believed (why else would a team maintain an exclusive relationship with a resale site) but unconfirmed; adding that any tickets sold on the secondary market, directly by the franchise, is “absolutely added revenue” for a team’s bottom line. Lehrman acknowledged that his company would “encourage” teams to sell tickets directly on the secondary market.

Howie Long-Short: Blue Jays President, Mark Shapiro touted the team’s home opener as the “highest-revenue game in the history of Rogers Centre”, but failed to mention that just 30% (13,000) of the stadium’s seats were ever offered on the primary market (i.e. through team box office). On the contrary, at least 20,519 tickets (45%) were available for purchase on resale sites within the last 60 days; at an average markup of 205%. Double-dipping and taking a cut of resale market proceeds is one thing, bypassing the primary market to increase team profits at the expense of your biggest fans (it was Opening Day) is unethical (marketing tickets at one price and selling them at another) is downright piggish. MLB (and any other leagues running this racket) needs to put a stop to this practice for the long-term good of the game, pigs get slaughtered.

Fan Marino: Speaking of the secondary market, the NCAA men’s basketball championship game is arguably the best value in sports. Kansas and Loyola-Chicago fans are long gone from San Antonio, but many bought tickets hoping their team would be playing tonight. Those seats now sit on secondary market, with the price dropping by the hour. According to TicketIQ, a leading ticket search engine, as of 10p on Sunday evening you could get into the building for $84; roughly 1/10th of the “get-in” price ($833) for the 2018 college football national championship game. Looking to go to the game? The NCAA Ticket Exchange, powered by Primesport (owned by OLE) is actually currently the cheapest deal on the market TicketIQ data sources. Below is quick comparison vs Stub Hub (prices after fees)

JD Sports Fashion (LON: JD) has agreed to purchase Finish Line Inc. (FINL) at a $558 million valuation ($13.50/share). The price represents a 28% premium on share values at the March 23rd close ($10.55), the day prior to the deal’s announcement. The transaction, subject to shareholder approval, is not expected to close before June 1st.

Howie Long-Short: As noted back on October 3rd, FINL added a “poison pill” and “shareholder rights” plan to bring SPD to the negotiating table (2nd largest shareholder); so, the offer that’s been accepted by the FINL board is particularly noteworthy on several fronts. Should the deal close, it would give JD a significant U.S. presence. It would also wrestle control of the company from Sports Direct International (LON: SPD), a direct competitor with a 9.9% stake (and 32% indirect interest) in the U.S. retailer. The market seems to believe SPD is going to counter as FINL shares closed last week at $13.54, above the proposed per share purchase price.

Fan Marino: While FINL reported mixed Q4 results (overall sales +.7%, net income of $16 million+ following a loss year-ago period, same store sales -7.9%), one segment of the business that performed well was Finish Line’s Macy’s (M) business (+8.5% YoY). For those of you who haven’t been to a mall in the last 5 years (like me), in September 2012 FINL became M’s exclusive partner for athletic footwear; introducing FINL branded footwear shops in 450 U.S. stores (and on macys.com). It’s interesting (if not coincidental) that when FINL signed the deal, the company projected it could boost annual sales by 30% ($350 million) on net income of $1.4 billion. The company reported FY17 sales of $1.844 billion.