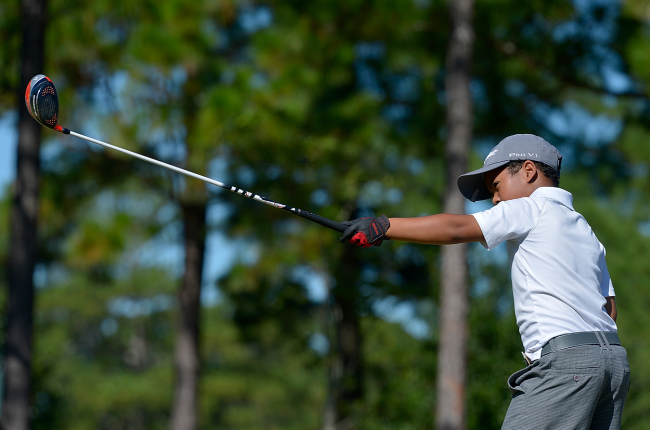 Xavier ‘Xeve’ Perez is the most hyped 12-year-old in the world. As the young golf prodigy continues to tear up the amateur level, he has already signed an NIL deal that would make most college and a lot of professional golfers very jealous.

Perez starting playing golf at the age of three. Since then, he has sky-rocketed to national relevance and is considered the next young superstar in the sport, gaining a reputation to some as the “next Tiger Woods.”

Xeve Perez is on a mission for his Master's jacket ⛳ pic.twitter.com/JvC1p7PLGh

He has been on the radar of golf fans since he was six years old and has won over 250 tournaments in the past nine years.

And he hits bombs.

Perez also has fantastic touch with his irons, something that kids his age typically do not.

Xeve Perez with some great touch around the green pic.twitter.com/HN50j4gsVB

As a result of his play, Perez is already being represented by GSE Worldwide, an agency that helps him structure his NIL deals. He has already signed a few, including brand partnerships with OnCore, JumboMax and Easypost.

On late Friday night, it was reported that the 12-year-old has signed his biggest deal yet.

“Xeve’s personality, talent and love for the game is inspiring, and we’re thrilled to welcome him to the Cobra Puma Golf family,” Dan Ladd, president and general manager of Cobra Puma golf, said in a statement. “He is a fantastic talent and role model, which aligns with our mission to push the game forward and inspire the next generation of golfers. We’re excited to be part of his journey.”

By signing the Puma partnership, Perez will exclusively wear the clothing brand’s apparel, footwear and accessories. He will also play with a full bag of Cobra clubs.

Nobody else in golf has inked a NIL deal of this nature. Pretty insane for Perez, who is still in middle school!