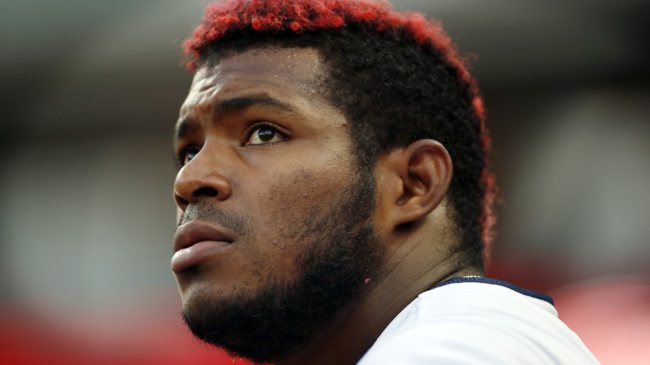 Yasiel Puig has plead guilty to his involvement in an illegal gambling operation dating back to 2019. The Department of Justice released its findings on Monday evening, detailing Puig’s activity and his lying about placing bets illegally.

According to that release, the former MLB outfielder “agreed to plead guilty to one count of making false statements,” a crime that carries a maximum penalty of five years in prison.

Puig allegedly began placing bets through a third party on behalf of an illegal gambling business. While sports betting has become more prevalent, and legal, in certain states throughout the country, there are many areas where placing wagers is still against the law. And placing these bets through unauthorized companies is a no-no.

The DOJ found text messages from Puig placing said wagers through that third party in June of 2019, wagers that racked up a near $283K debt.

After paying that initial debt off, the former baseball star began placing his bets directly through the website, nixing his affiliation with the third party. In a three-month period between July and September, he wagered on 899 different sporting events, consisting of basketball, tennis, and football games.

Yasiel Puig then lied to federal investigators about his involvement, on multiple occasions.

He’s now in hot water, facing potential prison time for his gambling addiction, which has all but ended any shot of a return to the Major Leagues. Which is a shame considering he was once considered a generational talent and budding baseball phenom.

After bursting onto the scene in 2013, Puig helped the Dodgers reach a pair of World Series over an eight-year career. As a rookie, he hit .319 with 19 homers. He’d follow that performance up with seven straight seasons of double-digit dingers while tallying 60 or more RBIs in four of those campaigns.

In 2019, he left Los Angeles, splitting time with the Reds and Guardians. Despite playing on two different rosters, Puig recorded a career-high 84 RBIs.

Fans were quick to react to the shocking news on social media, with most wondering what could’ve been had off-the-field issues not stunted his on-field production.

MLB content creator Marc Luino wrote, “Yasiel Puig will go down as one of the biggest wastes of talent in baseball history,” after hearing about his guilty plea.

Many others shared that sentiment.

Yasiel Puig biggest problem has always been himself. So much talent wasted.

5 tool player, but couldn’t keep himself in check

At one time, Yasiel Puig looked to be MLB’s next great generational talent. Man, how hard his career and personal life have fallen https://t.co/rptTLZRHLz

Doug Gottlieb posted, “And that was the last time we heard the name Yasiel Puig,” after the story broke. In terms of his baseball career, he’s likely right.