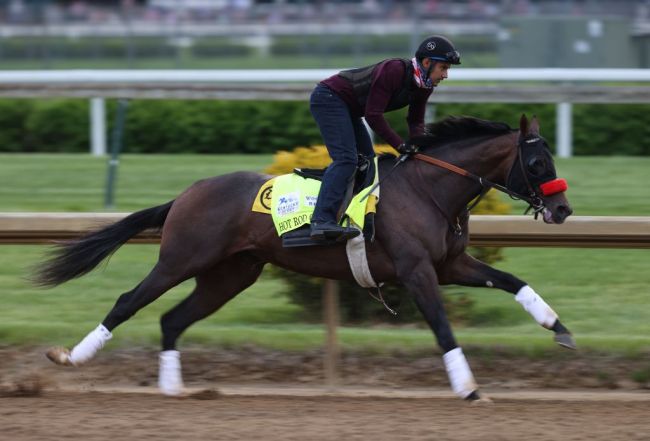 Eric Armagost, Dan Giovacchini, Reiley Higgins, Patrick O’Neill and Alex Quoyeser are just like you and me. The five beer-drinking, party-going fraternity brothers of Theta Delta Chi at Brown University were also teammates on the Bears’ football team from 2010 to 2014. Now, seven years later, they’re part owners of Hot Rod Charlie, a horse that has a good shot at winning the Kentucky Derby on Saturday.

The idea started two years ago at Del Mar Fairgrounds. O’Neill’s uncle is the well-known horse trainer Doug O’Neill, who trained Derby winners I’ll Have Another in 2012 and Nyquist in 2016. He offered Higgins and Giovacchini to sit in his seats at the San Diego County horse track and after the two had a great day at the races, Higgins suggested that the boys get into the sport. Basically, it was “The Gang Buys A Horse.”

There was a lot of initial apprehension when the suggestion was initially brought up to the group.

“Of the five of us, I was the loudest dissenter — like this doesn’t make sense from a dollars and cents standpoint,” Quoyeser said to the Courier-Journal. “I just couldn’t get past the fact that 90% of horse owners don’t make their money back and certainly don’t make a profit. I couldn’t come to terms that it makes sense from that standpoint.”

Despite any reservations, the lifelong memories and experiences outweighed any potential financial impact and they decided to do the damn thing. It helped that O’Neill’s family knows what they are doing.

“We’re in our mid to late 20s now and played college football together. You graduate and go off into the real world and how do you get this adventure going?” Giovacchini told the Courier-Journal. “We always looked for opportunities to go on snowboarding trips or go to a ball game or attend a golf tournament. This came around as a different idea. It was a way to spend time together, compete together, go on a new adventure.”

The first step to getting into horse racing requires setting a joint bank account and establishing an LLC. They decided to name their company after something that unified them— drinking games.

Boat Racing LLC, the name they chose, refers to a “boat race,” where teams race to finish their drinks in sequence. It’s essentially flip cup without the flipping. Just chug and go down the line.

There was a significant learning curve at first and their first two horses didn’t finish with any success. Boat Racing LLC first purchased a filly who didn’t like to run and lost all of their money. The five Brown graduates then purchased a colt who was seemingly on pace to win some races, but he ended up finishing last at a race at Del Mar.

Just as the beer-chugging bros were ready to give up, a third horse was claimed and gave Boat Racing LLC one last chance at finding success in racing. Fortunately, the third time was a charm.

Hot Rod Charlie was purchased for $110,00 by Dennis O’Neill, another of Patrick’s uncles who has a great eye for horses with talent. He is known best for purchasing I’ll Have Another, which won the Kentucky Derby and made millions, for $35,000 as a yearling.

“It can be great fun,” Doug O’Neill said to Horse Racing Nation. “We need the younger generation to jump on board with this great sport.”

From there, Roadrunner Racing’s Greg Helm purchased a 50% stake in Hot Rod Charlie and William Strauss of Strauss Brothers Racing and Boat Racing LLC both purchased a 25% stake. At first it seemed like another bad investment.

Hot Rod Charlie is the son of 2013 Preakness Stakes winner Oxbow and struggled significantly in his first three starts. On October 2nd, he finally broke through and found success at the one-mile dirt race at Santa Anita, earning an invite to the Breeder’s Cup Juvenile as an alternate.

Another horse dropped out of the race and Hot Rod Charlie entered into the field at 94-1 odds. He ended up finishing second. Since then, Boat Racing’s thoroughbred has not finished lower than third in any race he has run and qualified for the Kentucky Derby by winning at Louisiana.

Boat Racing is hopeful that the momentum will continue on Saturday.

“At that point, maybe because we’re naïve, we were so excited to be there for the first time to even have a chance,” Giovacchini said to the Courier Journal. “So I think the pressure was off somewhat. We love the momentum going into the Kentucky Derby. Knock on wood that he’s staying healthy and he has. He’s a gamer. You start to understand the personality and he just competes in every race and every workout. We couldn’t be more thrilled.”

As of Thursday afternoon, Hot Rod Charlie is amongst the favorites to win the whole thing at 8-1 odds and will run from the ninth post position.

If rooting for the boozed-up Brown brothers isn’t enough to get you behind the horse, Boat Racing has partnered with Melanoma Research Alliance and will donate a portion of their purses from the Kentucky Derby and the rest of the races in 2021 to research and awareness.

“When we realized we’re going to have a bunch of cameras and spotlight and wanted to promote a cause that people can gravitate towards,” Quoyeser said to the Journal. “We’re thrilled, blessed and honored to be able to direct people’s attention to a cause that affected so many but also those who affected our journey with Hot Rod Charlie.”

To make things even cooler, the football players are supporting another cause that corresponds with their time on the gridiron. Hot Rod Charlie will don a blanket that honors South Carolina fan Jake Panus, who tragically passed away at 16 years old when he was a passenger in a car that was involved in a DUI accident last August.

The Jake Panus Walk-On Football Endowed Scholarship at South Carolina raises money for a walk-on scholarship within the Gamecocks program each year. Hot Rod Charlie is helping to raise awareness for the fund.

So for those keeping track at home, here is why you should be rooting for Hot Rod Charlie on Saturday:

If you’re not pulling for Hot Rod Charlie, you’re wrong.