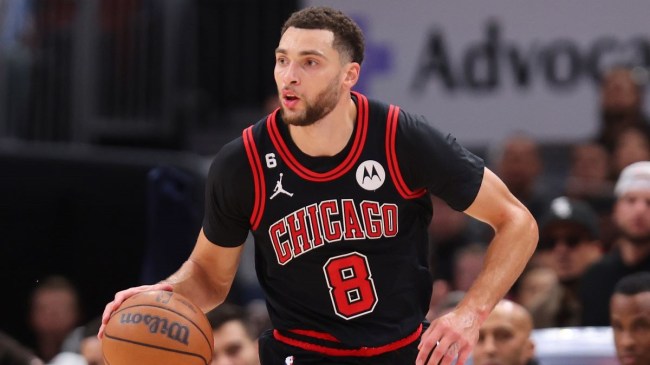 Mid-way through the 2021-22 NBA season, the Chicago Bulls looked like one of the biggest surprises in all of basketball. DeMar DeRozan was playing at an MVP level. Zach LaVine looked like a potential NBA All-Star, and Lonzo Ball finally looked like a player worthy of the No. 2 overall pick in the NBA Draft.

From that point on, it’s all fallen apart. Ball has dealt with a number of injuries. As has LaVine, and big man Nik Vucevic is flipping off random Chicago fans.

The Bulls were unceremoniously bounced from the NBA playoffs in the first round by the Milwaukee Bucks. And things haven’t gotten much better this season.

Chicago is 6-10 through the early part of the 2022-23 season. There are no signs of Ball returning to the court anytime soon, and DeRozan and LaVine have struggled mightily, especially with their shooting. Things reached a new low Friday night when the Bulls lost to the lowly Orlando Magic, 108-107.

It only got worse after the game when LaVine made some pointed comments about coach Billy Donovan.

LaVine was downright awful against the Magic. He shot 1-of-14 from the field for 4 points and was a team-worst -19. In response to LaVine’s struggles, Donovan opted to bench the star for the final 3:43 of the loss. That decision didn’t sit well with LaVine, who had some harsh comments to the media afterward.

Zach LaVine on sitting out the final 3:43 of tonight’s loss to Orlando: “That’s Billy’s decision. He’s got to live with it. Do I agree with it? No.” pic.twitter.com/guvBnW8Aoi

“That’s Billy’s decision. He’s gotta lay with it,” LaVine said. “Do I agree with it? No. I think I’d go out there and still be me even if I missed some shots. But that’s his decision.”

Bulls fans seemed to side with the coach over the decision.

Goes 1-14 and played no defense on the other end. I would’ve bench your ass too https://t.co/rFhlAh03pw

Pretty sure he didn’t agree with your decision to suck either https://t.co/TBMCHy1Bc0

But in today’s era of player empowerment in the NBA, it may not be a good sign for Donovan that one of his star players has seemingly abandoned ship.