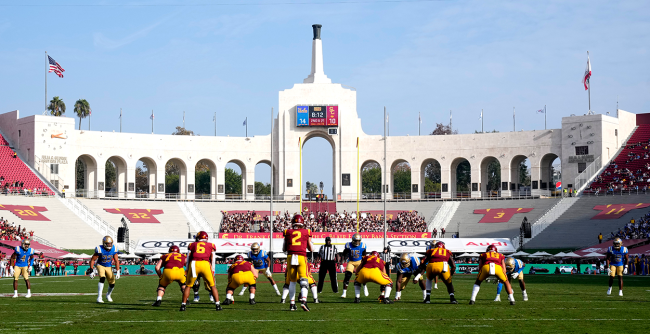 Five-star wide receiver recruit Zachariah Branch is the No. 2-ranked wide receiver in the Class of 2023. The Las Vegas-native committed to play for USC in December and chose the Trojans over offers from Alabama, Ohio State and Oklahoma.

Branch is currently gearing up for his senior year of high school, which will get underway in just a few weeks. In the meantime, he is doing impressive things in the weight room while finishing up his high school degree.

Listed at 5-foot-10, 172 pounds, Branch is not a big prospect and will need to put on weight once he gets to the collegiate level. It doesn’t seem like that is going to be any issue because he is little bit of a freak of nature.

While on the squat rack earlier this year, Branch causally put up 515 pounds. That is one pound short of three times his body weight.

Branch basically walked into the squat rack, put three of himself on his shoulders and put it up. Although he had a spotter, obviously, it did not look like he received any help.

In addition to Branch’s surprising strength, he is crazy athletic.

Branch is the No. 14 overall prospect in his class after an impressive junior season. En route to a state championship, the Gaels pass-catcher had 47 receptions for 1,076 yards and 14 touchdowns and will look to improve on those numbers this fall

Before he does, Branch took one last chance to show off his athleticism during the offseason. He recently posted a TikTok that his since gone viral that shows him catch a pass with one hand while sticking a standing backflip.

He is going to step into the wide receiver room at USC and become an immediate weapon over the middle for Caleb Williams. Branch has remarkable strength for his size, which will allow him to take a hit or two in traffic.