Zion Williamson Showed Up To Media Day Looking Like A Mini Shaq, Is In Completely Different Shape Compared To Last Couple Seasons 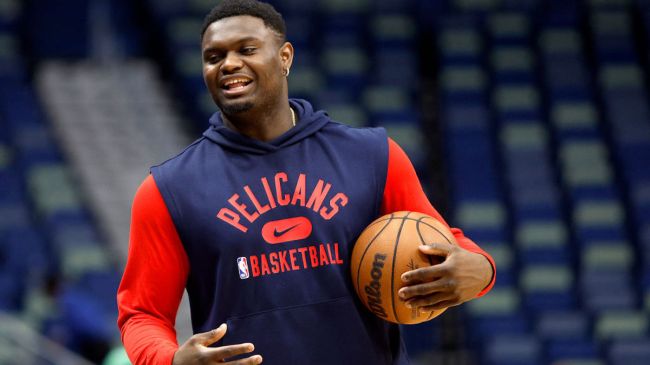 Zion Williamson, who missed the entirety of the 2021-22 NBA season due to a foot injury, made his first public appearance in quite some time at the New Orleans Pelicans’ first media day of the season on Monday and looked like a completely different person.

In shape Zion Williamson is a scary sight 😳💪

I am in awe of Zion Williamson’s weight transformation. I hope we get an interview or something with his nutritionist + trainer. Would love to see his diet and the caloric deficit that was required for him to shred so much body fat.

“I feel like I’m at my best right now… Moving faster, jumping higher. I feel great,” Williamson told reporters when he was asked about the current shape he’s in.

"I feel like I'm at my best right now… Moving faster, jumping higher. I feel great."

The 22-year-old power forward, who was selected by the Pelicans out of Duke University with the first overall pick in the 2019 NBA Draft, has played in just 85 professional NBA games thus far. Despite missing a majority of his career thus far, Williamson agreed to a five-year, $193 million extension with the Pelicans back in July.

Still, limited time on the court aside, there’s no denying that if healthy, Williamson is already a star in the league as he has career averages of 25.7 points, seven rebounds, and three assists per game.

When Williamson does return to the court this season, it’ll certainly be on a far better team than before as the Pelicans made the playoffs last season as the #8 seed in the Western Conference. During the offseason, in addition to giving Zion a new contract, they also gave guard 31-year-old shooting guard CJ McCollum — who they acquired from the Portland Trailblazers in a trade last season — a new two-year, $64 million deal.

In addition to the return of Williamson and the recent addition of McCollum, the Pelicans will also be leaning on All-Star Brandon Ingram and recent breakout role player Jose Alvarado.

RELATED: Zion Williamson’s Trainer Sends Warning To Rest Of The League As Pelicans Star Gears Up For Comeback