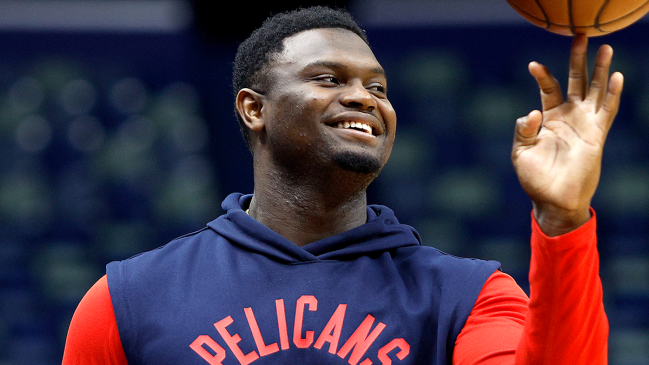 It’s been more than 500 days since the last time Zion Williamson played in an NBA game, as the man who had the “Generational Talent” label slapped on him well before the Pelicans selected him with the first pick in the 2019 NBA Draft had to put his career on hold for over a year courtesy of the foot injury that kept him sidelined for the entirety of last season.

It’s been impossible to talk about that extended absence without discussing the weight issues that were one of the hottest topics of conversation among fans last year. In December, a report surfaced claiming Williamson had tipped the scales at 330 pounds (close to 50 pounds more than his official weight at Duke), which—when coupled with unflattering pictures and rumors he’d fallen asleep during a film session—didn’t exactly paint him in the best light.

However, the narrative began to shift a bit over the summer after New Orleans reaffirmed their faith in the man who serves as the face of the franchise by signing him to a five-year extension worth a possible $231 million. That contract did include a clause that will give Williamson some major incentive to stay below 295 pounds, and plenty of evidence has emerged that suggests he’s poised to return with a vengeance when the Pelicans kick off the regular season against the Nets on October 19th.

Willamson has been working with personal trainer Jasper Bibbs since the start of 2022, and during a conversation with The Athletic, the former member of Utah’s strength and conditioning team said the two men spent the summer in Ft. Lauderdale focusing on a “rigid eight-week program that involved two-a-day workouts and a specific nutrition plan.”

Based on what Bibbs had to say, Williamson’s work paid off, as he told the outlet the big man is more than ready to take on whatever challenges the upcoming season throws his way:

“We focused on addressing body composition—his body weight, body fat, etc —while maintaining and improving flexibility, strength, and power. We also focused on improving his overall fitness. The more weight he carries around, the more stress it puts on the body. We focused on aerobic and anaerobic basketball-specific conditioning.

One of the main goals was to get Zion back to the same athletic ability he had before the injury. In the process, he’s improved athletically. I truly think he’s a better athlete now than he was before. Once you guys see him on the court, I think you’ll agree…

Nobody at this stage of their career will be able to improve their body composition, their body control, and overall athleticism without putting in a tremendous amount of work. He’s had a daily commitment during the summer, waking up early for 5 a.m. workouts and coming back for 7 p.m. workouts. He did it just like clockwork.”

Williamson was already a force to be reckoned with prior to being sidelined, so if he manages to live up to the hype, the rest of the league could end up dealing with an even bigger headache than before.