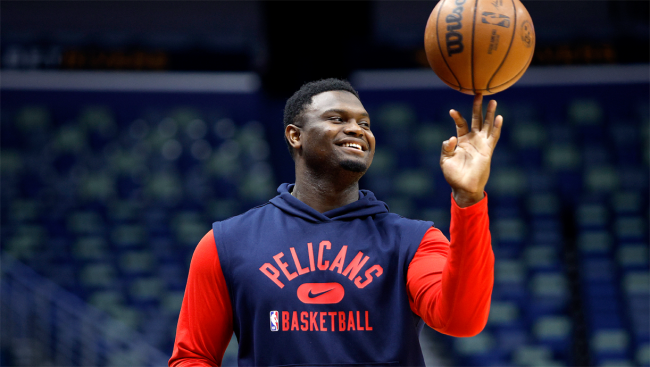 I’ll go on record as saying that heading into the 2019 NBA Draft and even afterward, I was one of the people who boldly claimed Zion Williamson would have a better NBA career than Ja Morant. As things currently stand, I look foolish. Ja Morant was the 2020 Rookie of the Year, made the 2022 NBA All-Star Game, and he’s averaging 28.2 points per game in his career. Meanwhile, Zion Williamson hasn’t played a game in 423 days (since May 4, 2021)…

I’m still very much rooting for Zion Williamson to succeed in the NBA both because I’d like to be proven right about Zion vs. Ja and because I’ve been a fan of his since his first day at Duke. He’s famously been plagued by injuries and has been battling back in recovery.

Kevin Durant famously called Zion Williamson a “once-in-a-generation type athlete” and a college coach referred to him as a “freak of nature” but we haven’t really seen much on the NBA court yet. With all that in mind, the New Orleans Pelicans are betting $231 million on him being the future of the franchise and coming back from surgery fully healthy and better than ever.

Williamson said after the season ended, “I couldn’t sign it fast enough.” Indeed, the All-Star locks in commitment to New Orleans.

The deal is expected to include protections that both sides were sorting through overnight and will finalize, sources said. https://t.co/n0hyRwRk9e

Zion has made $30,126,480 so far in the first 3 years of his NBA career. He’ll now earn more than that almost every season for the next six years…

Embiid had a similar career his first couple years. His contract extension had a lot of game incentives

Zion after receiving a max contract for a few dunk videos recorded on his iPhonepic.twitter.com/lx79biI1Hi

Knicks fans would lose their minds.

Zion has to be the first player to get a $200M contract extension who has missed more games in his career than he played.

Imagine the Knicks did this… IMAGINE https://t.co/eEPAsdeVc7