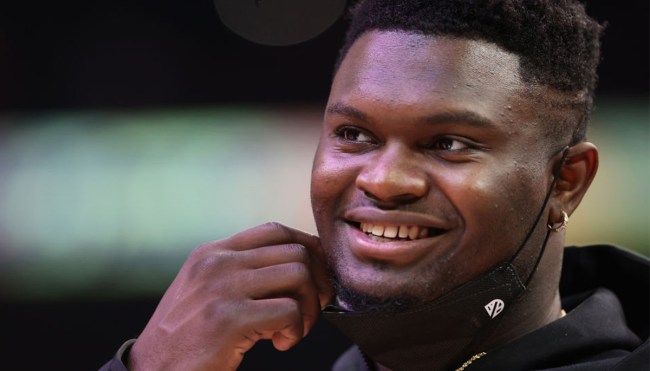 Last week, the New Orleans Pelicans announced they were pumping the brakes on Zion Williamson’s return from injury just days after the internet exploded following a report he had tipped the scales at a staggering 330 pounds at some point earlier this year.

Now, it appears Williamson has slimmed down a bit since his less-than-svelt physique turned plenty of heads at the start of the season. However, based on a number of reports that have surfaced since the former Duke standout took his talents to New Orleans, it doesn’t seem like keeping his weight in check has been a huge priority (despite the best efforts of the franchise that pays him millions of dollars a year to stay in playing shape).

If you’re a Pelicans fan who was already worried about Williamson’s work ethic, then you’re probably not going to be super thrilled about some tweets beat reporter Jake Madison sent out on Sunday after he called out the big man for his “lack of professionalism” before spilling some tea about some recent incidents that seem to be cause for concern.

Totally fair thing to ask. That part isn't. But has his lack of professionalism, let's call it, added to or caused this setback? https://t.co/lAzddiG9Hl

According to Madison, the road bumps Williamson has encountered on the road to recovery from the foot injury that’s kept him sidelined since the start of the season could be linked to his repeated refusal to show up to rehab workouts—and while he did show up to a recent film session, he was apparently unable to stay awake during the meeting.

Madison declined to go into a ton of detail when pressed for more information, but he strongly implied the Pelicans are coddling the player who the team was counting on to become the face of the franchise when it scooped him up with the first pick in the draft in 2019.

Maybe I'm not allowed to say some of that. Maybe they wouldn't tell me. Maybe nothing happened because the team is terrified of upsetting their superstar so he gets away with things others wouldn't. IF that is the case the answer to all of that would be no.