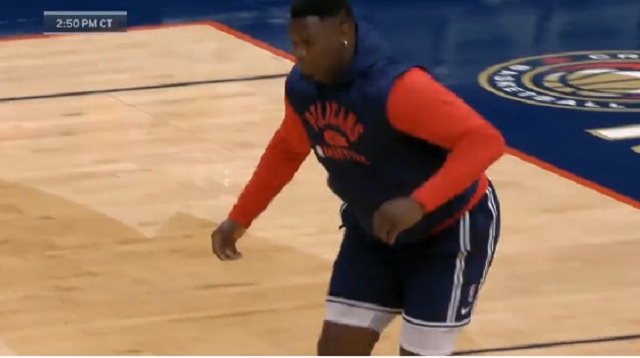 Zion Williamson made his first appearance on the Pelicans court this season and his physique quickly became the main topic of conversation among fans.

During the offseason, several people within the league were surprised by how heavy looked during the Pelicans’ preseason tour.

“When he joined the Pelicans’ recent preseason trip to Minnesota, several league personnel on hand were struck by his heavier appearance than his listed playing weight last season of 284 pounds. “I know Zion at 280, and he was not 280,” said one observer.”

Williamson, who is currently rehabbing a foot injury, was seen warming up before the Knicks-Pelicans game and he looked huge.

Fans were stunned by Zion’s physique.

Zion looks like he's ready to play offensive line for the Saints instead of playing basketball https://t.co/e4bLSiNNgh

Burst of an interior linemen https://t.co/Q2Ar7bgAVt

My dawg Zion out there doing the Ickey Shuffle get lil bro some help man pic.twitter.com/FIKYRLV3qo

Saints calling him in the morning for DL https://t.co/GVbAMj8HR7