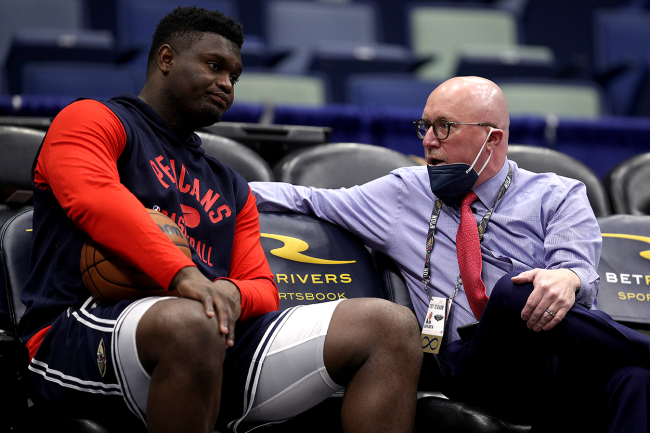 As the wait for Zion Williamson’s return to the court continues, the New Orleans Pelicans are reportedly doing anything they can to keep him healthy. The former No. 1 draft pick has been on the bench for much of his career with injuries. The team is hoping to change that narrative.

A new FAQ update from ESPN’s Brian Windhorst and Andrew Lopez gives a glimpse into the recovery process. Per the report, the New Orleans organization has tried to support Williamson however it can.

One of those ways is apparently through food. According to ESPN, the Pelicans restructured their culinary practices for their superstar.

“The Pelicans have poured resources, time and energy to protect Williamson’s health. They have changed members of the staff and even changed some of their culinary practices in an attempt to support him. They have talked with him about protecting his body from extra hits.”

This shakeup of staff and practices comes after concerns surrounding Williamson’s weight began to circle earlier this month. Not only did he appear to gain a lot of weight, but reports said that he tipped the scale at over 300 pounds as a result of foot surgery in the offseason.

Even Williamson’s former teammate J.J. Reddick spoke about his need to get in better shape.

Considering that NBA teams likely have some of the top culinary practices in the world, it is curious to know what was changed. Regardless, for a top franchise to be so concerned with the health of its top player that it changes its entire system, is unprecedented.