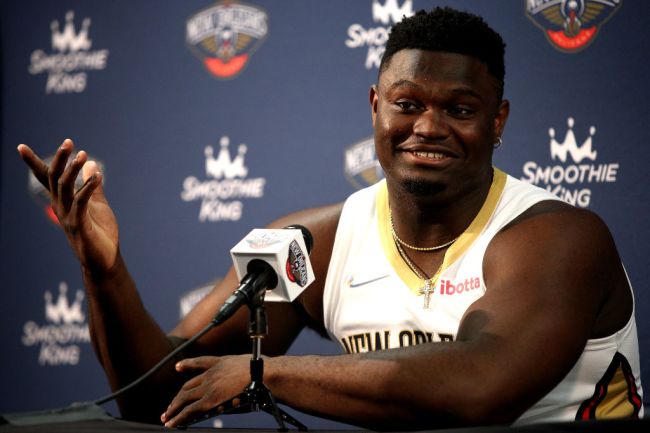 Zion Williamson won’t be in the lineup for the New Orleans Pelicans season opener against the Philadelphia 76ers on Wednesday. The 21-year-old had surgery on his broken foot this offseason and will be re-evaluated in two weeks, but with no set timetable for a return to the hardwood.

A new report from Bleacher Report’s Jake Fischer emphasizes that the Pelicans are obviously monitoring Williamson’s situation. Included in that ‘situation’ is his weight.

According to Fisher’s source, the Pelicans have some concern with Williamson’s weight as he’s been out of action this offseason. Williamson reportedly weighed “north of 300 pounds this offseason.”

“When he joined the Pelicans’ recent preseason trip to Minnesota, several league personnel on hand were struck by his heavier appearance than his listed playing weight last season of 284 pounds. “I know Zion at 280, and he was not 280,” said one observer.”

“These are the injuries you have to be the most concerned about, a foot injury for a guy with noted weight issues,” said one Western Conference executive.

Social media reacted to the report of Williamson reaching over 300 pounds as well as his media day pictures ahead of the season.

Cc: @threaten RT @DarthAmin: Yo who in Zion camp thought it would be a good idea to have him in a commercial looking fat as hell on a couch playing video games with a bowl of chips and a soda in front of him? pic.twitter.com/knanBWsdQg

I get it. For an NBA player hes out of shape. But the dude is low key more muscular than anything with a little bit of fat and hes like 6ft 7 😂. I cant have fat people retweeting this in my timeline calling Zion fat. That's crazy. https://t.co/sPUQPxrD8x