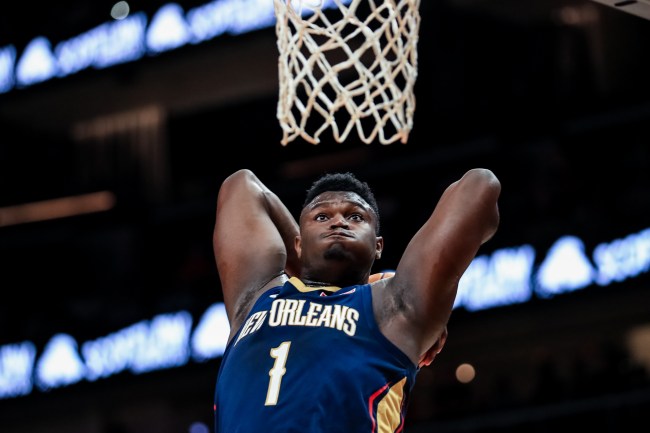 Zion Williamson has been putting in work during the quarantine and appears to have bulked up before the NBA restart in Orlando later this month.

For the past few months, Zion has had access to the Pelicans workout facilities during the NBA’s Coronavirus hiatus and it looks like he took advantage of that time to get himself in the best shape of his basketball career.

The New Orleans Pelicans’ rookie phenom has been a regular at the team’s facility throughout the hiatus, one of several players the league granted exceptions to allow them to rehab injuries under the supervision of team trainers to avoid any setbacks. All team facilities were closed on March 20, nine days after the season was suspended because of the ongoing coronavirus pandemic.

Zion has been diligent about taking care of himself,” said David Griffin, the Pelicans’ executive vice president of basketball operations. “He’s in a good space physically and mentally.”

Another team source went a step further. “He’s going to shock some people,” the source said.

On Thursday, the Pelicans released a photo of Zion at a recent team practice and he looks absolutely jacked.

Zion back in the lab… looking slimmer. (via @PelicansNBA) pic.twitter.com/OwX1YbLtbr

NBA Twitter is hyped about Zion’s new physique heading into the season.

Please join my gofundme to buy Zion a Bane mask to make him look even more badass pic.twitter.com/qiMT7uY9fs

If you’re a Grizz fan who thought Zion might show up to Disney World out of shape, I have some bad news via the @PelicansNBA Twitter account. pic.twitter.com/OZwNtGY9QA

Looking at this makes me want to pick up the heaviest thing I can find. pic.twitter.com/G1mlBjUmXg