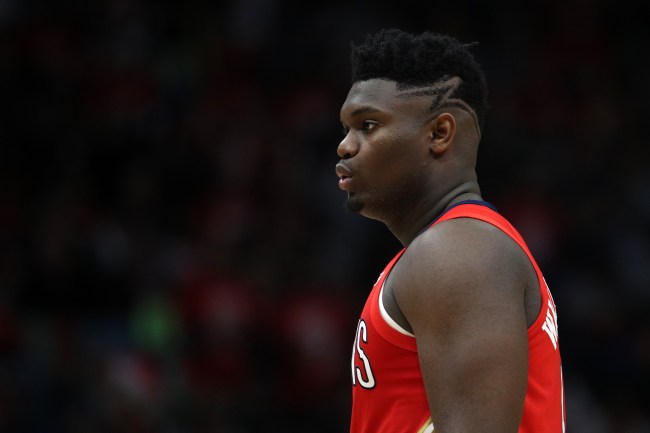 Zion Williamson has finally made his long-awaited NBA debut with the New Orleans Pelicans and after a slow start, he erupted in the 4th quarter. Zion went 4-4 from behind the 3-point line and finished the game with 22 points (8-11 FGs) in only 18 minutes on the court.

During Wednesday night’s Pelicans game, it only took 4 minutes into the game before ESPN’s Mark Jackson questioned Zion Williamson‘s weight and ESPN even threw up a graphic about how much he weighs right now:

They (ESPN) were REALLY trying to make this into a story and it was painfully obvious. As expected, fans ripped Mark Jackson to shreds on Twitter.

Zion spoke with ESPN’s Adrian Wojnarowski on a podcast about his weight and according to Zion, he’s just built different and his weight is actually something that works in his favor.

“There’s really no comparison to me. I try to add every level to my game,” said Williamson, who had an impressive NBA debut for the Pelicans in their Wednesday night loss to the Spurs. “My body is just built different. Some people try to look at it as a weakness, but I look at it as a blessing.

“People aren’t used to guarding this kind of size and I’m able to add a little finesse to my game so it has flavor and I’m a playmaker so I can create for my teammates and when I have to finish I’m gonna finish.” (via NYPost)

It’s easy to see how Zion believes this since he’s agile and he has always been one of the top scorers anytime he’s on the court. It will be interesting to see if he changes his tune in the coming years in the NBA but that’s a conversation that can be had years from now. In the present, we just need to appreciate how incredible he is on the court.

Zion’s time in Wednesday’s game was restricted but that had nothing to do with his weight:

Fans wanted to see more, but coach Alvin Gentry said he couldn’t heed their chants of “We want Zion!,” during the final five minutes of a the loss.
“The medical people said that was it,” Gentry said, alluding to precautionary restrictions placed on Williamson’s playing time in the early days of his return to action.
“Me, personally, I don’t want any restrictions,” Williamson said. “But I’m not a doctor or a trainer, so I’ve just got to listen to them.” (via NYPost)

The New Orleans Pelicans host the Denver Nuggets tonight (8pm) and then the Celtics will travel to NOLA on Sunday (6pm) to face Zion and the Pels. The Pelicans face off against the the Memphis Grizzlies on 1/31 which will be a fun game of young teams and you an mark your calendar for 2/25 when the Pelicans travel to Los Angeles where they’ll face LeBron James and the Lakers.