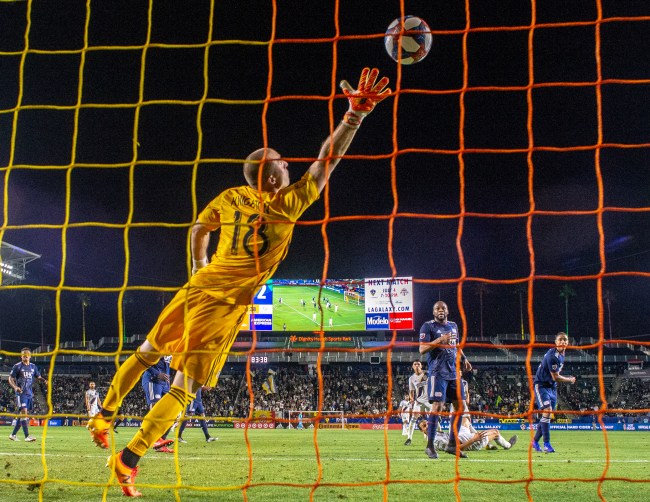 I think it’s pretty fair to say that Zlatan Ibrahimovic is the biggest start in the MLS at this moment in time. He’s one of the cockiest soccer players in history but he also has the resumé to back up his hubris.

Zlatan‘s a true journeyman. Jumping leagues and teams with regular frequency throughout his career. He’s had 34 goals for Ajax, 23 for Juventus, 57 for Inter Milan, 16 for Barcelona, 113 for PSG, 17 for Manchester United in the Premier League (33 goals for LA Galaxy) and he’s one of only three active players worldwide with more than 500 combined goals for club and country. He also never misses a chance to show off his tattoos:

He’s the only player to play in the UEFA Champions League on seven different teams and the only player to score in the Champions League with six different teams. He’s won 13 championships in four different leagues, and he and Cristiano Ronaldo are the only two players in history to score during every minute (1 through 90) of a match throughout their career. And it’s not just how many goals Zlatan’s scored that makes him such a superstar, he always seems to show up at the perfect time and put an unbelievable goal in the back of the net.

With his team (LA Galaxy) trailing 2-0 against the New England Revolution, Zlatan flipped his body upside down and scored a bicycle kick that left the defenders and goalie absolutely stunned. And from the look on Zlatan’s face you can tell he knew in that instant how sick this goal was:

Unfortunately for Zlatan, the New England Revolution were able to hold onto that 2-1 lead in manager Bruce Arena’s debut against his former team. Zlatan has 11 goals in 12 games (3 assists) so far this season for the LA Galaxy and is off to a pretty red-hot start.

The LA Galaxy sit in 2nd place in the Western Conference just behind Los Angeles Football Club (LAFC) who are already 9 points ahead in first place with 37 points to 28 for the LA Galaxy.