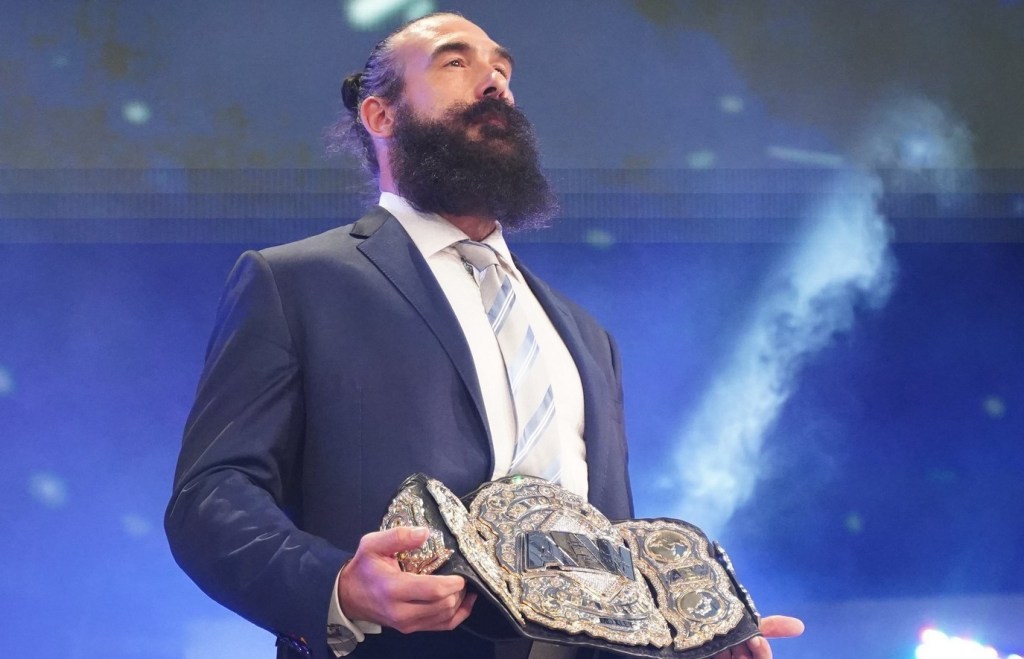 Tonight on AEW Dynamite on TNT, All Elite Wrestling will pay tribute to Brodie Lee.

Lee – real name Jon Huber – passed away suddenly the day after Christmas at the age of 41 after battling a non-Covid related lung issue.

According to inside sources, Lee started having breathing issues in October. As his condition slowly deteriorated, AEW management was notified of the severity of the situation by Lee’s wife, Amanda, but was asked to keep quiet on the subject.

AEW announcer Tony Schiavone is one of the first people inside the company to speak publicly about Lee’s final few weeks and gave a peek into the Huber family, specifically the wrestler’s young son Brodie Jr. and his love of professional wrestling.

This week on “What Happened When,” Schiavone told co-host Conrad Thompson how dedicated the family was to support the company and the kind of person Brodie Lee was behind the scenes.

Schiavone confirmed that Lee’s wife, Amanda, did come to meet with the company to discuss her husband’s condition and the likelihood of his recovery.

“Unfortunately, the AEW Uncensored podcast that we do, the one we did with Brodie, we did it the day before he got sick,” explained Schiavone.

“Then we heard he had been airlifted to the Mayo Clinic and Amanda, his wife, came and met with the entire group and told us how bad a shape he was in and please don’t say anything to anybody. I think everybody did a great job keeping it close to the vest as the old cliche goes. We all knew it didn’t look good but we were all hoping he would kick out.”

Schiavone went on to explain how the company learned about Lee’s passing the day after Christmas.

They had brought little Brodie to TV and wrestling is his life. He is 8 years old. He really is a great kid.

They have taken care of him and he follows guys around all the time in the back and he becomes a part of us. Amanda is back there.

When we do TV tapings now, we will have a live show or a taped show, Dynamite, and then we will have sometimes 13 dark matches. We are there until 2 am sometimes.

I was sitting back there with Amanda when Dark was going on and she said, ‘I’m dead tired. I need to get back and get some sleep but he (Brodie Jr) just loves this so much, I’m going to wait.’

So, she waits until it is all over and he gets involved with the guys and sits in the gorilla position. He sometimes comes out with a mask on and does some crazy things.

It was a tough day when we got the news and it still is.”

Current AEW Champion Kenny Omega even “lost” the title to Brodie Jr., putting the 8-year-old over in a dark match that his father was able to watch.

Last week, I read about how Kenny Omega "lost" the AEW Championship to Brodie Lee's son. I didn't put much thought into it at the time, but now, it has more meaning. Brodie Lee got to see his son's first match before passing away.

Props to AEW for giving them this moment. pic.twitter.com/Ire1BFD2Q4

“It’s a tragic story,” said Schiavone. “It’s a heartbreaking story because it’s such a good person and such a good dad.”

The tribute to Brodie Lee airs Wednesday, December 30th, at 8 pm on TNT.

[h/t to WrestlingNews.co for the transcription]

Needed a laugh today so went back and rewatched my talk with @CodyRhodes about wrestling promos gone wrong. He retells a story about @RealJakeHager learning the importance of phrasing & timing. Full interview ->https://t.co/g44oDJrXTz pic.twitter.com/OuxY3gppm9