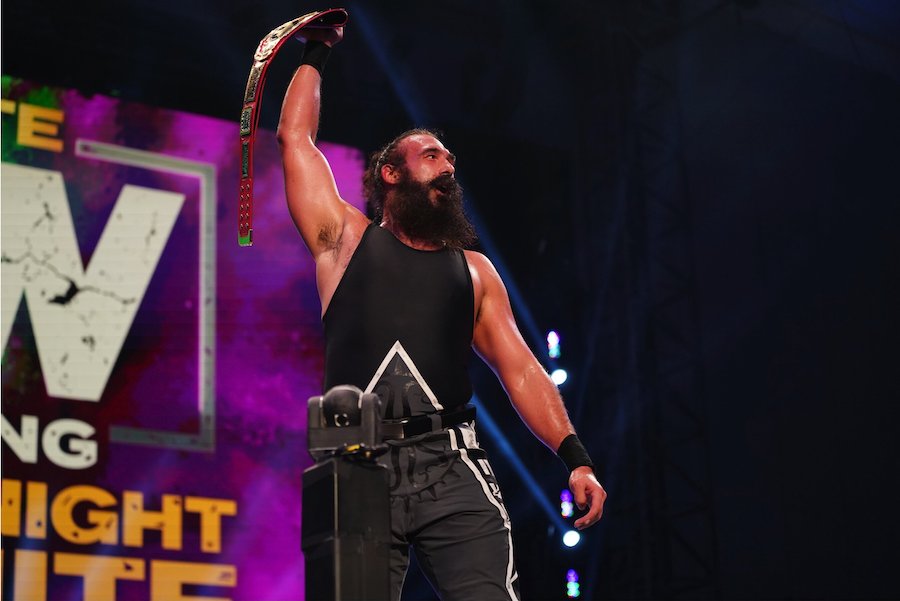 The wrestling world is still reeling from the shocking death of Jon Huber – better known to wrestling fans as Brodie Lee in AEW and Luke Harper in the WWE.

Huber passed away over the weekend at the age of 41.

Huber’s wife, Amanda, explained in an Instagram post that her husband died after “a hard-fought battle with a non-Covid related lung issue.”

Brodie Lee had been off TV since October following a Dog Collar Match with Cody Rhodes. Fans believed Huber was staying as a way to sell the brutal match but Lee was only supposed to be off TV for a few weeks.

“So he did the match with Cody, and the idea was for him to be off for a couple weeks, with the idea he took such a brutal beating, and then when he was off, that’s when he got sick,” explained Dave Meltzer on the latest episode of Wrestling Observer Radio.

Meltzer spoke in-depth about Lee’s passing and revealed that Huber started having issues breathing during a workout not long after the match.

“He had done a workout on his Peloton bicycle, and he got really tired, and he couldn’t figure out why he couldn’t finish his workout. I guess it was two weeks after that it got bad, and I don’t know all the details,” said Meltzer.

Meltzer also reported that a few select individuals inside the company knew about Huber’s condition but were asked to keep it confidential.

The outpouring for Huber has been non-stop for the last 48 hours as friends, family, and colleagues in both AEW and WWE telling stories and paying respects to the late performer.

AEW star Jon Moxley spoke with Sports Illustrated about Lee’s passing and shared memories about their time together on the independent scene, and in WWE and AEW.

“It doesn’t feel real,” Moxley told SI. “It feels like I’m in a very vivid dream and I’m waiting to snap out of it. My brain hasn’t accepted it yet. Right now, I’m completely f—— numb.”

AEW and WWE also each released a video package honoring Brodie Lee and Luke Harper and the man behind the personas, Jon Huber.

CM Punk and Mick Foley are donating all sales of their merchandise on Pro Wrestling Tees to go directly to Huber’s family. EC3 released a new t-shirt in honor of Huber with all proceeds going to his family.