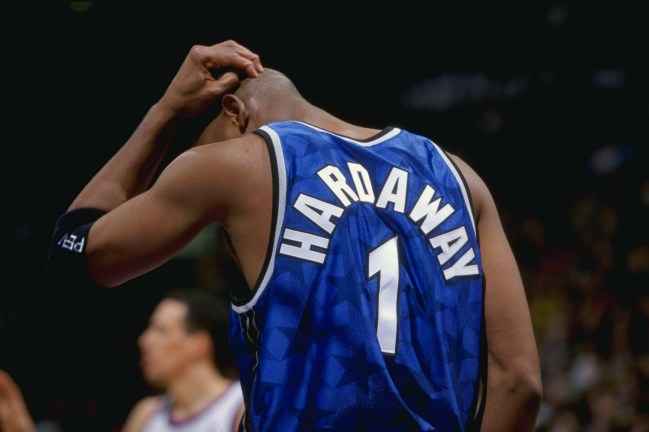 Back in the 90s, kicks were currency. If you were like me, back then you were a pimple-faced middle schooler who was still trying to figure out what he was all about. Basketball shoes helped mold my image before my personality arrived. Today, I am 30 years old, and I don’t know if I’ve experienced a more all-encompassing joy than showing up to basketball tryouts with squeaky new stompers. So fresh. So clean. So pure.

I can remember showing up to tryouts and the first thing I did was scope my competition, evaluate their shoe choice, and then dominate them. As I like to tell myself.

It’s been a while since I revisited the sneakers of my adolescence, so I decided to take a trip down Nostalgia Lane and check back on the 10 most iconic basketball kicks of the 90s. The 90s were a golden age for basketball shoes, so I undoubtedly missed some, so bare with me.

The Reebok Kamikaze, Shawn Kemp’s signature line, was launched in 1995. The Kamikaze II was Kemp’s most popular signature shoe, making its debut in 1996. Kemp rocked these kicks during his best season in the NBA (’95-’96), when he averaged a double double, starting in the All-Star game, and leading his Supersonic team to its first NBA Finals  appearance.

A post shared by Holy Grails of a SneakerHunter (@radicatesneakers)

After a mind-bogglingly good ’96-’97 season in which Iverson won the Rookie of the Year award, Reebok followed up his rookie shoe, the Question, with the Answer DMX 10. The shoe set itself apart with its hidden lacing system, Series 2000 midsole and visible DMX cushioning setup.

Penny Hardaway’s Nike Foamposite One first dropped in 1997 and debuted for a hefty $180, due to an innovative futuristic design that designers and manufacturers originally said could not be done. The shoe, designed to look like a beetle, was originally designed for Scottie Pippen, but during a session where Hardaway didn’t like any of the designs presented to him, he spotted the Foamposite in designer Eric Avar’s bag. The rest was history.

In June 1996, 19-year-old Stephon Marbury made the decision to sign with And 1, a three-year old apparel company that had no history with NBA players. They hadn’t even produced a single shoe. Thanks to the Marbury 1’s, by 2002, AND1 had gone on to sign dozens of NBA players.

Kevin Garnett’s 1999 signature shoe is one of the prettiest and iconic kicks of the 90s, long before The Big Ticket left Nike for Adidas.

The kicks that Tupac famously wore inside the booklet for All Eyez On Me, hip hop’s first double-disc album. Hill was the face of FILA for the latter part of the ‘90s, with his FILA 2’s debuting in 1996 and still enduring as a classic in the hypebeast world.

Gary Payton’s 17-year NBA career was nothing short of incredible. Payton was named All-Defensive First Team and All-Star Game nine times each, won Olympic Gold Medals in 1996 and 2000, won an NBA Championship in 2006 with the Miami Heat. He was nicknamed ‘The Glove’ for his lockdown defensive skills, The Nike Zoom Flight Glove.

One of the most iconic basketball sneakers ever created, Shaquille O’Neal’s fifth signature sneaker. Made by the same designer of Shawn Kemp’s Kamikaze II’s, the shoe extended past the hardwood when Will Smith wore the Reebok Shaqnosis in the movie Men In Black. Shaq himself claims that the Shaqnosis’ are his favorite kicks he’s ever worn.

Released in 1990, Dee Brown famously pumped up the sneakers before winning the 1991 Dunk Contest with a no look dunk that remained a poster on my wall until I moved away to college.

The cream of the crop in the basketball shoe world. Arguably the most beloved Jordan shoe of all-time, the “Concord” Air Jordan 11 hit stores in the fall of 1995. They’re so fresh that Jordan wore them despite getting fined for wearing them because they went against the NBA’s footwear regulations at the time.