Sources: Men’s Turtlenecks Made A Big Style Comeback At The Super Bowl, According To Ian Rapoport (Also: Coffee!) 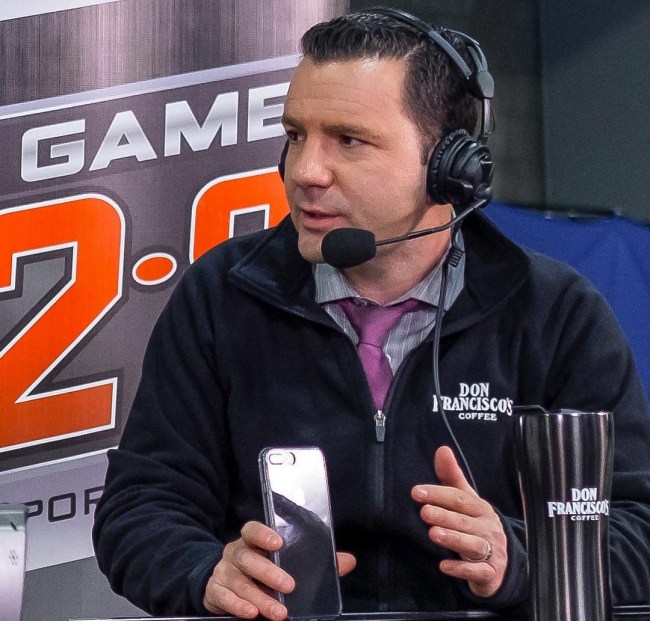 You know NFL Insider Ian Rapoport for breaking news news around the world of the NFL. Important trades, whatever team is exercising whatever out or option, staff changes, etc. Rarely does RapSheet break men’s style news.

But last week, in an exclusive conversation from Super Bowl 53, the NFL Insider became sources himself when he casually broke an important tidbit of fashion news to BroBible. It was based on acute journalistic observation from the hordes of celebrities, influencers, and media types hanging around Radio Row:

It’s called fashion, look it up:

Here’s our conversation, best enjoyed with a cup of freshly brewed Don Francisco’s.

BroBible: Ian, the thing that brings us together is coffee..

Ian Rapoport: Don Francisco’s Coffee! It’s rich and delicious and awesome. It’s a family-owned business out of Los Angeles – They’ve been involved in coffee business for almost 150 years. They started roasting coffee in Los Angeles over 50 years ago when the grandfather immigrated from Cuba. It’s headquarters are really close to the Coliseum where the Rams call home.

It’s been a whirlwind of day at Radio Row. But we made it, courtesy of @RapSheet's favorite French Roast. Glad we packed enough for the week! 🏈☕️ #coffeekick pic.twitter.com/k9g5UFvIId

I think you probably know, not only do I work a lot I don’t sleep a lot. I have two kids – four and five and a half. So I’m basically mainlining coffee and I found something I love at Don Francesco’s.

This question is burning a hole in the Internet right now: Tell me about those socks.

My boys love Spider Man! They saw it in the theaters. They also bought me Grim Hunt socks.They go shopping and they buy me these ridiculous ties and obviously I rock them. I rock them on air all the time.

Once you start dressing stupid and embrace it, you can wear whatever you want and I would certainly do it.

I mean I learnt today that turtlenecks are back and there’s literally nothing more stupid than turtlenecks. I don’t know how people wear turtlenecks and, like, not laugh their heads off.

Okay, all right so now we’re getting somewhere.. Are there really people on Radio Row wearing turtlenecks right now?

Radio Row is filled with celebrities and players and everyone talks about products and the game. And I see a lot of turtle necks. So much so and I turned to one of my producer and be like ‘talk to me about this.’ Like… this is back in? So I’ve learned that turtlenecks are back in. I still make fun of them like I used to. I guess wearing a turtleneck and jacket is like not that ridiculous anymore.

So then what else is back? I’m I going to start rocking colored jeans. I’m going to get green jeans to rock around in.

I’m already envisioning a future where, you know, you’re wearing a tweed jacket with a maroon turtleneck by the Thanksgiving game next year.

I went through primary school growing up. The dress code – kakis were preferred but you were allowed to wear colored jeans, but not blue jeans. But you could wear colored jeans. I had an unbelievable array of colored jeans – I had the olives and green and the maroon and kind of lightish pink/purple. I was all about color jeans.

Whatever was allowed, you embraced.

If the players are wearing turtlenecks now, that means the media will be wearing it by next year. That’s how it works, right?

That’s how it works with sneakers, right?

I mean… I wear Allbirds now. You know, Allbirds sneakers?

They really cool like two years ago in Silicon Valley. Only now am I just getting in the mix of them, which is fine. Gotta discover them at some point, right?

All you need is Allbirds and UNTUCKit – Then you can basically dress yourself like a full Silicon Valley bro.

Found 15 minutes in a crazy day to jump on the phone with @RapSheet from radio row at the Super Bowl. Talked about how turtlenecks are making a comeback in football circles and all I can think about is how everyone gonna dress like this neck-xt fall. pic.twitter.com/tKDIo7E810