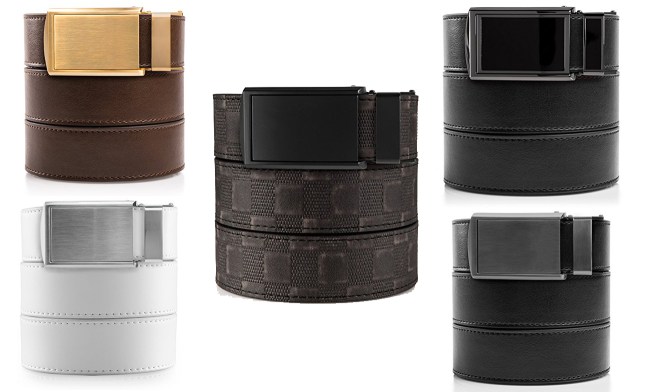 In 2004, Brig Taylor was teaching abroad in Moldova, a country in Eastern Europe that shares borders with Romania and the Ukraine, and received a generous and life-altering gift from one of his students. It was a ratchet belt. The belt used a tab and ratchet teeth, instead of holes and an unreliable prong, to keep tight around the waist.

Fascinated with the utility of the belt, Taylor thought it could become a huge hit with some stylistic changes. This lead to the launch of SlideBelts and his own take on the ratchet belt concept.

For the last 8 years, SlideBelts has been constantly improving their buckle to create a clean, minimalist look without the ugly lever and bulky mechanism of a normal ratchet belt. They want your belt to look good, feel good, and be easy and intuitive to use. They also don’t want to charge a bunch of money, even though you won’t need to ever buy a belt again.

A huge assortment of SlideBelts is on sale today, all 60% off.

If you’re into survival, there’s also a SlideBelt that comes equipped with a knife. Maybe use it to cut up all your old belts?